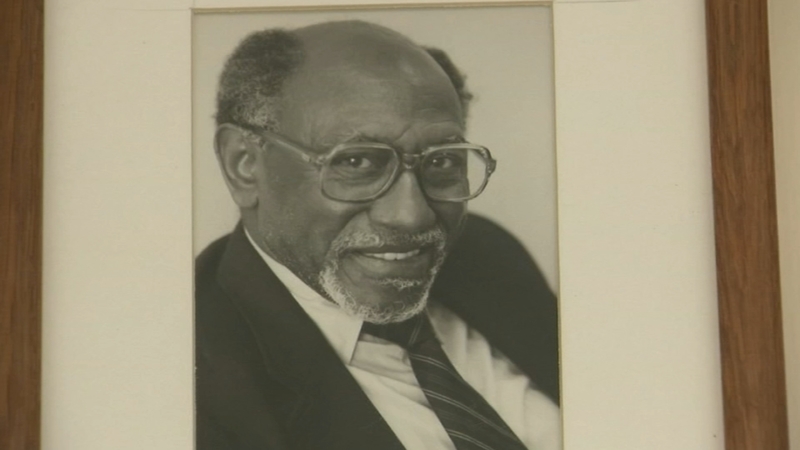 CHICAGO (WLS) -- Friends and family gathered for the funeral of civil rights activist Timuel Black on Friday, just shy of his 103rd birthday.

The Chicago historian and educator died last week at age 102.


His wife, Zenobia, and other family surrounded his casket as they remembered a life that touched so many.

"Timuel Black was a historian who knew history, who taught history, and who shaped history in this city and this world," Father Michael Pfleger said.

Black was a witness to key moments in modern history. His family was part of the Great Migration north, and after experiencing the sting of racism on Chicago's South Side, he committed his life to calling out and rectifying injustices.


"I marched with him in many places, many times over the years. I wouldn't be any place but here today," said Nikki Stein, who was his former student at Hyde Park High School.

Black was instrumental in bringing Dr. Martin Luther King Jr. to Chicago to deliver his first major speech in the area. He later became a political organizer and supported Harold Washington's mayoral campaign. When Barack Obama was a young community organizer in Chicago, Black helped him. He became a trusted counsel to Obama when he ran for president in 2008.
The private funeral service included a eulogy from Father Michael Pfleger and words from Mayor Lori Lightfoot, Senator Dick Durbin and others.

"There might not have been a President Barack Obama if it were not for Tim Black. Or a Mayor Harold Washington, or a Senator Carol Mosley Braun," said Sen. Dick Durbin, D-Illinois.

"I want to thank him for being a soldier in the Second World War. We don't have many members of that great generation left, and he was surely one," Cook County Board President Toni Preckwinkle said.


"His purpose was to help everyone with love, joy and a life well lived was reflected in Tim's eyes, his face, his smile," said Peggy Montes, chair emeritus at DuSable Museum of African American History.

"Timuel was indeed the wisest of elders, but he was forever young. And always ready to roll up his sleeves and get involved," Pfleger said. "Well done, Brother Black, you did what you said you wanted to do...you made the world a better place."

On Thursday afternoon, friends and admirers paid respect to Timuel Black at his wake in Chicago's Grand Crossing neighborhood.