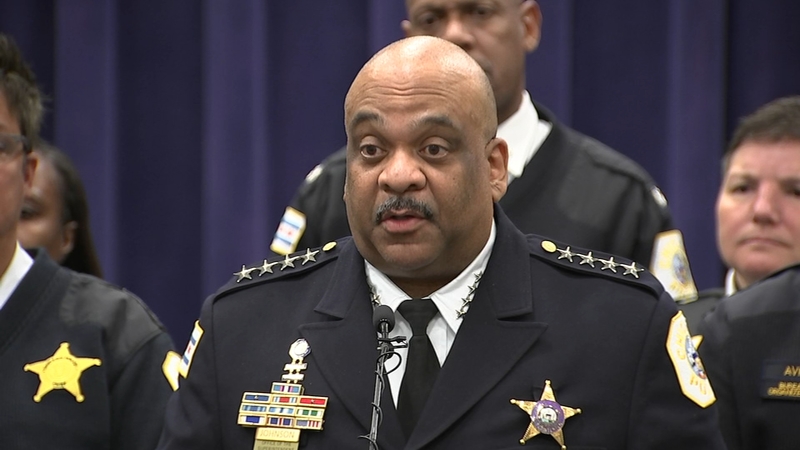 Trump was clearly annoyed that Johnson boycotted his speech, and took time to mention his name in a negative light almost a dozen times. Trump used crime statistics and Chicago's status as a sanctuary city to criticize Chicago's chief of police.

Bashing Chicago violence has been part of Trump's repertoire since his 2016 campaign, but he took it one step further Monday by targeting Johnson.

"There is one person that is not here today, we are in Chicago. I said, where is he, I want to talk to him. In fact, more than anyone else, this person should be here. He could learn something," Trump said during his speech.

Trump's continued bashing of CPD's top cop drew applause from other police chiefs. Johnson, who is hosting the conference, previously said he made a decision not to attend Trump's speech because "it just doesn't line up with our city's core values along with my personal values."

"People like Johnson put criminals and illegal aliens before the citizens of Chicago and those are his values and frankly those values, to me, are a disgrace," Trump said.

"Getting caught up in negativity is just something I never do and I'm not going to do it now," Johnson said in an afternoon press conference he called in response to the speech.

Surrounded by his command staff, Johnson defended his decision to boycott the speech and used the opportunity to talk about crime stats. He said the president ignored a 40 percent drop in shootings in three years.

"The national narrative that Chicago is a city on fire is simply not true," Johnson said. "We have our challenges on the South and West sides, but I want to remind people we also have 17 neighborhoods in the city that are safer than Manhattan and L.A."

He also called on Trump to restore a federal grant that he's tied to immigration efforts and Chicago's status as a sanctuary city.

"Those things were stopped, so if people want to help us, then restore those things," he said.

Mayor Lori Lightfoot also responded Trump in a tweet, saying she is standing by the city's top cop.

"President Trump knows as much about policing as he does running a fair and transparent government. I stand by the Superintendent for living up to the values of this great city and its residents," Lightfoot tweeted.

President Trump knows as much about policing as he does running a fair and transparent government. I stand by the Superintendent for living up to the values of this great city and its residents.

Johnson reminded the president that the same officers who he criticized for not protecting Chicago spent all day protecting him. While Trump was giving his speech at McCormick Place, Johnson was nearby, directing CPD resources from the police command post.

Johnson's decision to skip Trump's address angered the city's chapter of the Fraternal Order of Police, which said in a Facebook post that "such a gesture would be an insult to both President Trump and the office of the presidency itself and would be a mark of disgrace upon the city throughout the entire nation, including Mayor Lori Lightfoot." Lightfoot has also refused to meet with Trump while he is in her city.

Then FOP Lodge 7, which represents rank-and-file Chicago police officers, announced that it had cast a vote of no confidence in Johnson.

The vote might please Trump, who likes to tell officers not to treat crime suspects so gently and was cheered at last year's gathering of the same police chiefs' organization in Orlando, Florida, when he advocated the use of the "stop and frisk" policing tactic that has been deemed unconstitutional.

The president's visit also comes as more than 25,000 members of the Chicago Teachers Union have been on strike since Oct. 17.

At the conference, Trump signed an executive order creating a presidential commission on law enforcement to study issues like substance abuse, homelessness and mental illness, the White House said. The order calls for establishing a framework for better training, recruiting and retaining law enforcement officers.

The president also announced that the Justice Department will begin a stronger crackdown on violent crime in the United States, targeting gang members and drug traffickers in high-crime areas.