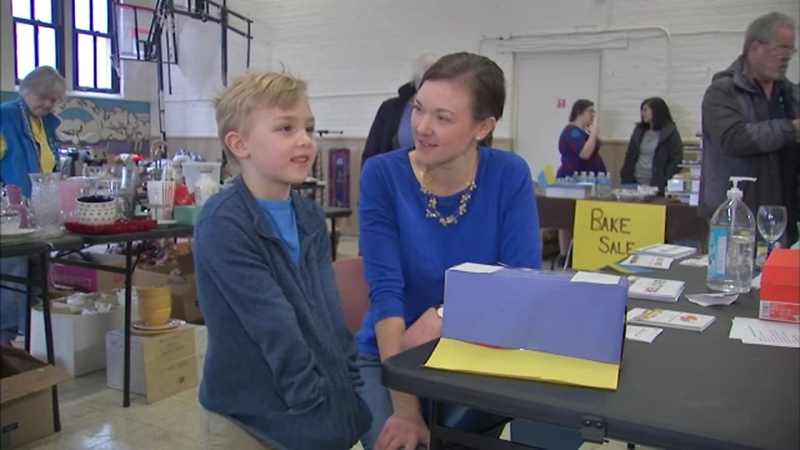 CHICAGO (WLS) -- A new effort to help the people of Ukraine is the brainchild of a 6-year-old from Portage Park.

Aiden Oesch is the little boy who came up with a big idea to have a neighborhood rummage sale to help out those in need in war-stricken Ukraine.

"In the original idea, it was to take stuff and bring it," he said.

"We did recognize that there are neighbors of ours that are feeling the effects of this directly," said the boy's father, Rev. Kyle Oesch.

His mother, Natalie, helped organize the effort and said her son was inspired to do something after making prayer cards in class for people impacted by Russia's invasion of the European country.

He even made a donation box donning the colors of the country's flag with those prayer cards attached.

"We really did feel like this was an idea that God had placed on his heart and that is why we felt we just had to act on it," his mother added.
Neighborhood residents donated hundreds of items to be sold and church members were volunteers.

Toys, clothes, and even some furniture were on sale and prices began at $.25 and up to a few dollars.

"I can't imagine what's going on over there, so even just a small way to show up -- buy some cookies,' said rummage sale shopper Emi Kanda.

RELATED: Illinois Helps Ukraine: From Chicago to the suburbs, residents step up

Organizers said they hope to raise anywhere from $5,000 to $10,000, which they will donate to UNICEF and the Anglican Relief and Development Fund for the relief effort.