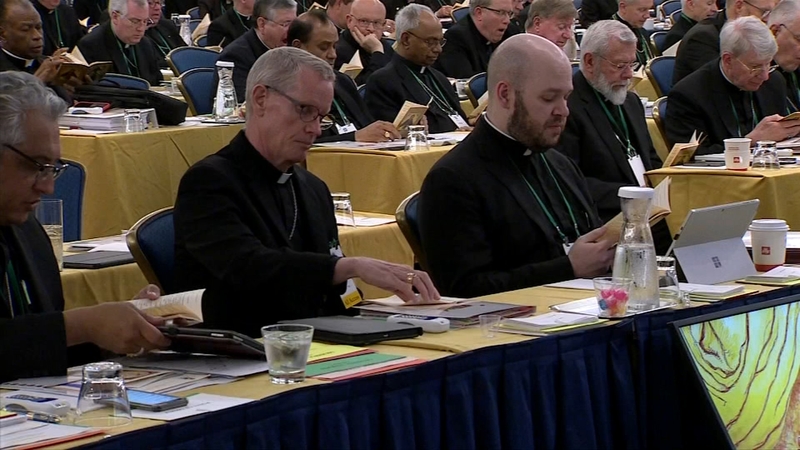 BALTIMORE, Md. (WLS) -- Chicago Cardinal Blase Cupich is among the nation's Catholic leaders meeting in Maryland this week, dealing with the sex abuse crisis in the church.

Cupich made waves on the opening day of the conference.

Seventeen years after U.S. bishops gathered to proclaim "zero tolerance" for priests involved in sexual abuse, the bishops themselves are now the focus as they work to stop misconduct at the top.

Holding bishops accountable sounds simple enough, but it took a global meeting in February at the Vatican and an order from Pope Francis to finally move it forward.

Cupich played a key role in developing the proposed accountability measures approved by the Pope. Tuesday, Cupich called on his fellow bishops to include laypeople in that process to ease fears that the bishops may not be able to police themselves.

"We have to make a commitment to each other and to our people that we're going to include laypeople," Cupich said.

As the meetings begin, the president of the Bishops Conference, Houston's Cardinal Daniel DiNardo, is facing an accusation of mishandling a case of adult sex abuse, which he strongly denies.

"I have very intense disagreements with what's been reported," DiNardo said.

Even so, he is calling for stronger bishop accountability.

"I'd certainly want to see this done, don't want any more delay," he said. "I'd like to see this happen."

The practical move is nearly 20 years in the making.

"I think we should have included bishops from the very beginning," said Cupich.

Chicago Cardinal Blase Cupich is among the nation's Catholic leaders meeting in Maryland this week, dealing with the sex abuse crisis in the church.

The working proposal would make archbishops of larger cities responsible for handling cases involving bishops of smaller dioceses in their regions. For instance, Carinal Cupich would monitor cases involving any bishop in Illinois.

Another change being considered is a new nationwide hotline to report abuse.

"I believe lay involvement has to be from very beginning when report is made," Cupich said.

A hotline would be available to take accusations from the public and under a Cupich proposal, non-clerical experts would be there from the start.

"That person conducting hotline would call person I appoint as officer to take care of reports, gather info, present to me, then together looks to see how move forward to Holy See," Cupich said.

Civil authorities would also be involved for potential criminal charges.

"We have to make sure that people have trust that church is safe place. I believe that it is," Cupich said. The last allegation of abuse by clergyman of young person in Chicago was almost 15 years ago. And we also have to keep in mind that nationally over 10 years, on average, there have been cases throughout the whole United States of priest abusing a child. That's taking into consideration 70 million Catholics."

For the first time in their history, the Catholic bishops will vote on the rules that they themselves will be subject to on Thursday.

The Bishop of Springfield, Illinois explained why he's denying communion to lawmakers who supported the changes.

The Roman Catholic Church is against the Illinois' Reproductive Health Act.

While he was in Baltimore, the Bishop of Springfield, Illinois explained why he's denying communion to lawmakers who supported the changes.

Bishop Thomas Paprocki issued a decree, denying communion to House Speaker Mike Madigan and Senate President John Cullerton, he said he believes it's a matter of defining the Catholic faith.

In Paprocki's mind, that sin must be acknowledged, before reconciliation. Even if others believe that denying access to communion is merely a punitive action.

"Ultimately it's not about punishing, I want to see them come back to communion, uphold churches teaching and respect for life," Paprocki said.

Which raises the question of how other Catholics should be treated, if they believe in abortion rights.

"I think many of the faithful are rightfully scandalized by that, saying how can this person call themselves a Catholic, and remain a Catholic in good standing, if he's proposing things that are directly opposed to what the Church teaches," Paprocki said.

Cardinal Cupich has a different point of view.

"I have never taken that path, I decided it's better to continue to keep dialogue open and teach what the church teaches and I can only continue to do that," Cupich said.

Catholics in Chicago should not be expecting a decree from their archbishop.

Another developing topic in Baltimore, the announcement of a new saint with ties to Chicago.

Pope Francis announced a step forward on the road to sainthood for the first known black, American Catholic priest.

Father Augustus Tolton was born in 1854 to a slave family in Missouri but escaped to Quincy, Illinois after the Civil War. He served as a priest in Chicago. He attended seminary in Italy, because American seminaries would not accept him because of his race.

Fr. Tolton's story may not be well-known, even to Catholics in general. He only lived to the age of 43.

"He was an effective priest, dynamic priest. People loved him," said Bishop Thomas Paprocki with the Diocese of Springfield, IL.

"Whenever you have a hero figure in community inspire through ages and races. I think he's going to have an impact on all of us, when people hear his story," Cupich said.

The Pope's action means Fr. Tolton is considered "venerable" by Catholics; the next step would be beatification, where a person is declared to be "blessed," after a miracle is attributed to that person by a praying Catholic.