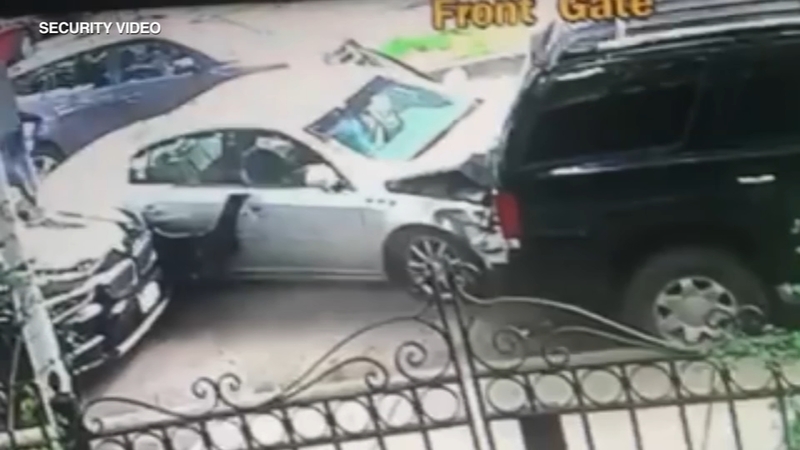 CHICAGO (WLS) -- A carjacking came to a crashing halt Tuesday afternoon in Buena Park, with a woman who was still in the car fighting off the offenders

It was his SUV that was damaged in the crash.

"I got a call from a neighbor; the neighbor told us there's a lot of excitement in our home," Malki said.

Malki rushed home to find the victim still on the scene and several police officers investigating what happened.

Two women were loading a car in the 800-block of West Windsor Avenue in Uptown around 3:30 p.m. when three suspects approached and demanded keys to the car, Chicago police said.

RELATED: More than a dozen men on bikes steal car, force driver out in Streeterville

Most of the suspects were riding on Divvy rental bikes, police said.

Investigators say two suspects jumped in and drove off with one of the women still in the car.

Police said she struggled with them as they repeatedly threatened her with a gun.
"She was fighting them the entire way, and I've never seen a situation like this, with this girl who was fighting two criminals waving guns at her," Malki said.

After a few blocks, the car crashed into Malki's Escalade, and the offenders eventually ran off. They were caught nearby.

Malki said he's glad the woman was not injured. He said it took courage for her to fight the offenders.

But he's concerned that this is part of disturbing trend in his neighborhood.

"It's a quiet neighborhood, but I'll be frank with you, during the past couple of months, there has been an increase in break-ins and crime," Malki said.