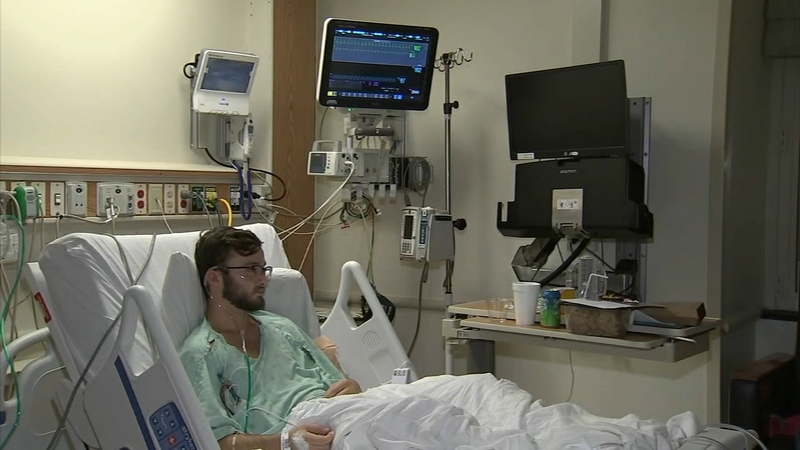 GURNEE, Ill. (WLS) -- A suburban teen is hospitalized, fighting to breathe, due to a lung infection his parents say was caused by vaping.

His family said his symptoms came on suddenly, with two days of uncontrollable vomiting.

"My lungs feel like they're being crushed by 20 pounds," Adam Hergenreder said.

The 18-year-old's lungs are only inflating with the help of a machine. He's been hospitalized at Advocate Condell Medical Center in Libertyville, bed-bound since Saturday, and almost didn't make it there.

"They told me if we didn't bring him in when we did, his lungs would have collapsed and he would have died," said Polly Hergenreder, his mother.

Two hospitals and several doctors later, a pulmonologist pulled up an X-ray and found Adam's lungs were only partially functioning.

Adam spent the last year and a half consuming about one and a half Juul pods a day.

"When I first started Juuling I didn't know what nicotine was, so I just thought it was vape juice," Adam said. "I don't even know what vape juice is."

Then he added THC dabs.

According to the Illinois Department of Public Health, Adam is one of more than two dozen people who have gotten sick from vaping. But the American Vaping Association said, "Each day of this crisis brings more evidence that street vapes containing THC or other illegal drugs are responsible for these illnesses, not nicotine vaping products."

Before he's even out of the hospital bed, Adam and his parents are waging war on vaping.

"It almost killed my son," Polly said. "I'm not going to be silent."

The Illinois Attorney General's Office said it is investigating Juul Labs for possible violations of consumer protection laws. Adam's family said they are not sure when he will be able to leave the hospital. His doctors said he cannot leave until he can breathe without the help of machines, and while his lungs will recover it will take months of therapy.
Report a correction or typo
Related topics:
health & fitnessgurneelibertyvillevapinghospital
Copyright © 2022 WLS-TV. All Rights Reserved.
TOP STORIES
Some issues arise on 1st day of USPS free COVID tests
Teen killed in Noble Square shooting: CPD
400M N95 masks available to the public for free starting next week
Cracker Barrel to pay $9.4M after man was served glass with chemical
Video: Burglars break into NW Side liquor store, steal cash register
Man charged in Kenosha Co. bar shooting guilty on all counts
Teens allowed to drive big rigs in new federal program
Show More
WBEZ board approves Chicago Sun-Times acquisition
Preckwinkle calls for justice in Chicago Lawn shooting of hairstylist
Chicago children's TV host Bill Jackson dies at 86
Airlines worldwide rush to change flights over US 5G problems
Allstate buys Loop building
More TOP STORIES News