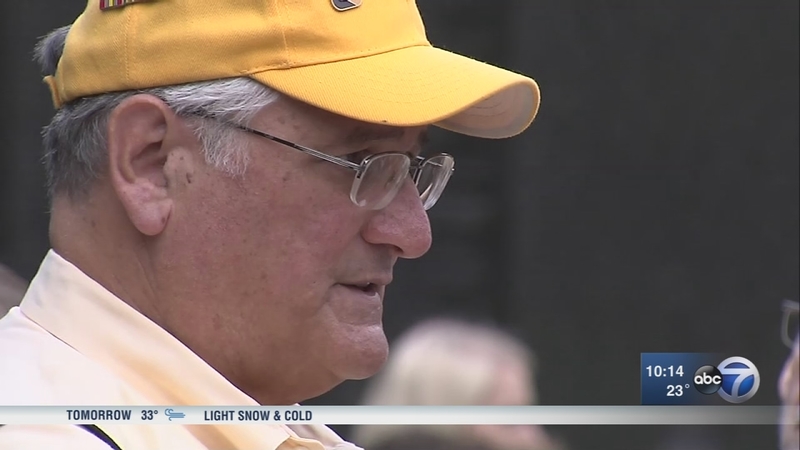 CHICAGO (WLS) -- For more than 13 years, Vietnam War veteran Paul Baffico has gone to the Vietnam Veterans Memorial in Washington every month to volunteer. Even though we followed his journey two years ago, his mission is still the same and continues today.

"My routine hasn't changed," Baffico recently wrote in an email. "However, the Vietnam Veteran population is shrinking fast (only one third of us still living), so many encounters with them at The Wall can be pretty emotional."

For Baffico, volunteering as a docent has been an emotional journey and one he plans to continue for years to come. After all, reaching out to fellow veterans and educating visitors about the conflict is still front and center.

"Most visitors are becoming further removed from the history of the war. So asking, 'What was this war about?' is becoming a more common question," he wrote.

As we celebrate our nation's veterans, here's another look at the dedication and determination Vietnam War veteran Paul Baffico has for his own men who died during the conflict - and lessons all of us can learn.

IN HIS OWN WORDS, IN DEPTH

In Vietnam, Baffico was a 23-year-old combat communications platoon leader, witnessing the horrific deaths of soldiers who served under his command. In all, five of his soldiers were killed. And their deaths are driving him to take a healing journey. He is trying to find inner peace and silence his mind from the past.

So every month, Baffico takes a trip from Lake Bluff to the Vietnam Veterans Memorial Wall. He has made the monthly trip for more than 11 years. In other words, 139 consecutive months.
EMBED More News Videos

Vietnam veteran Paul Baffico's journey, in his own words.

"I don't want to forget these guys," said Baffico, who served in the U.S. Army's 101st Airborne. "I can't explain why they got killed and I got to live, but I did. And I need to do something with that. That really is the essence of why I come here."

Baffico wasn't alone. As he says, his wife Max "saved me."

Paul Baffico on his first trip to the Vietnam Veterans Memorial Wall.

In 1996, a grim-faced Baffico made his first trip to the Wall with his son Jeff. It was a school trip with his youngest son, and it didn't go well.

Ten years later, his wife Max suggested he visit the memorial and told Baffico, "How about if you just talk to your men themselves? Maybe that would work."

Baffico reluctantly returned. He stood in front of the panels where the names of five soldiers under his command are etched: Michael D. Bohrman, Kenneth B. Luttel, Kenneth P. Tanner, Andre C. Lucas, and Gus Allen.

He spoke to them directly.

"Of course, I started with 'I'm sorry,'" Baffico said, continuing with tears. "I wish you were standing here and my name was on that wall. I really meant that from the bottom of my heart."

At that point, Baffico said a docent named Leroy approached him. Their story, their bond moved Baffico to do something he never expected. It was a moment that kicked off Baffico's mission: monthly trips to the Vietnam Veterans Memorial.
EMBED More News Videos

At that point, Baffico said a docent named Leroy approached him. Their story, their bond moved Baffico to do something he never expected.

TOUCHING THEIR NAMES ON THE WALL

So today, if you visit the memorial, you may see Paul Baffico. He'll be standing in front of his men's names on panels 8-11. And once there, like Baffico, you can honor each service member by touching their names on the wall.