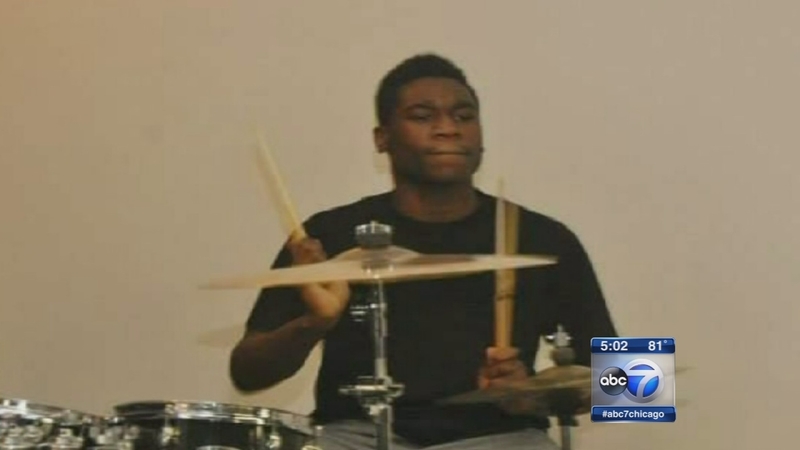 CHICAGO (WLS) -- A 17-year-old boy fatally shot near the Hadiya Pendleton Park in the city's Bronzeville neighborhood is one of 18 people shot, five of whom died, since the start of the Fourth of July holiday weekend, officials said.

Vonzell Banks, 17, and a 19-year-old male were shot at 4:45 p.m. Friday by someone driving past them in the 4400-block of South Calumet Avenue, officials said. Banks was shot in the back and pronounced dead at Stroger Hospital. The 19-year-old was shot in the foot.

The shooting happened near the Hadiya Pendleton Park, which was named after a the King College Prep student gunned down in 2013 shortly after performing at President Barack Obama's inauguration in Washington, D.C.

In response to the shooting, community activists have scheduled a vigil at 9 a.m. Saturday at the park.

Neighbors in Bronzeville gathered for a vigil early Saturday at the Hadiya Pendleton Park, where a 17-year-old boy, Vonzell Banks, was fatally shot Friday afternoon.

"It's messed up," said Keith Ivory, who said gang and drug activity keeps him on alert when he walks to work at 5 a.m.

But the violence is not just in Bronzeville; the holiday weekend is off to a rough violent start around the city.

The latest victim was a 26-year-old man who was shot twice at about 11:40 a.m. in the abdomen in the 6700-block of South Bell Street in the Englewood neighborhood, police said.

Earlier Saturday, in North Lawndale at 3:20 a.m., a 41-year-old man was shot in back and arm while sitting in a car in the 4200-block of West Cermak, officials said.

Between roughly 8 p.m. and midnight Friday, three people were shot and wounded. A 33-year-old man was shot in the 3500-block of West 24th St around 7:45 p.m. in a possible drive-by. He was shot in the chin, right forearm and abdomen. A 19-year-old was shot while standing in the 200-block of West 104th Street around 11:39 p.m. when he was shot. A 41-year-old man was shot while he was walking on a sidewalk in the 700-block of East 44th Street when someone fired shots out of a passing vehicle, police said.

Chicago police officers will be working 12-hour shifts this weekend to help keep curtail gun violence. That rule was put into effect after last year's deadly Fourth of July weekend, when 82 people were shot. Fourteen of those people died.

But there are also everyday people like the "Moms on Patrol" who are trying to help keep the peace. The group is encouraging other mothers to get involved. For more information on Moms on Patrol and how to volunteer, contact: Tamar Manasseh at 773-885-9871.