The utility shared that revelation with ABC 7 Monday as it continued testing hundreds of water samples, searching for the source of lead contamination found in 15 of the south suburb's residential properties.

Aqua Illinois received the water sample results in question on Thursday. After analyzing the data and realizing there was a potential threat, the utility issued a "do not consume" alert to all University Park, Monee Township and Green Garden customers Friday.

Aqua Illinois President Craig Blanchette said not all 15 samples with heightened lead levels were substantially above the EPA's "action level," but the utility still wanted to be overly cautious.

"We care about this community. This is our home area, this is where we live. And we want to make sure that our customers are safe," said Blanchette.

Blanchette said he's been in University Park since Friday, with workers from across the country joining him.

Some of new results from weekend testing, which Blanchette said have been shared with EPA regulators, led Aqua Illinois to announce late Sunday that some areas in the south suburban community could resume tap water consumption.

Those areas, according to Aqua Illinois, were Arbors at Hickory Creek, Fairway Clubs, Pine Woods Court, Governors State University, and areas west of I-57; residents were told to run the tap water for approximately two minutes, or until it flowed clear, before consumption.

But one University Park official estimated hundreds of homes were still without drinkable tap water Monday evening, relying on bottled water for cooking, brushing teeth, and preparing formula as well. Aqua Illinois has said the tap water in all system homes continues to be safe for bathing.

"It's upsetting and nerve wracking and stressful because you're concerned about how safe is your water even just for showering," said Rita McCune, a resident without water.

Also unanswered: when lead contamination in the area began. Aqua Illinois said the lead-laden samples were taken as part of a routine, annual sampling. Those samples could have been collected between May 15 and June 4.

"Everyone here has grandkids and elderly people who may have brushed their teeth or consumed the water before the notice got out," University Park Mayor Joseph Roudez III.

This comes after the system water source switched from wells to the Kankakee River in recent years. Aqua Illinois says it has more than 100,000 customers receiving water from the river and that no other customers' samples have shown unsafe lead levels.

Despite other lingering questions, some residents and local officials said Aqua Illinois handled the situation well.

Part of that customer service has been bottled water; Aqua Illinois said it has handed out more than 6,000 cases of water with more ready as the south suburban community continues waiting for answers. 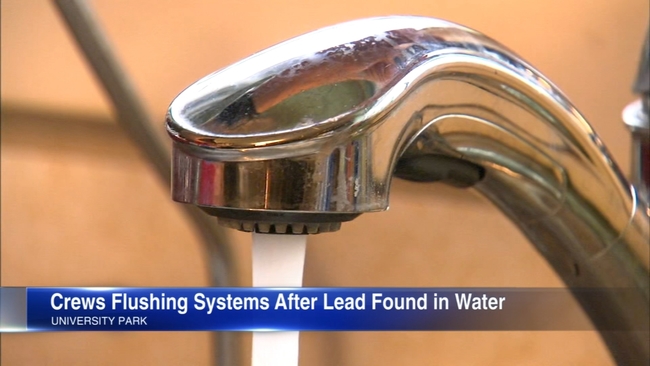 Water now safe to consume in areas of University Park