'Some fatalities,' more than 20 injured after SUV plows into Wisconsin holiday parade: police 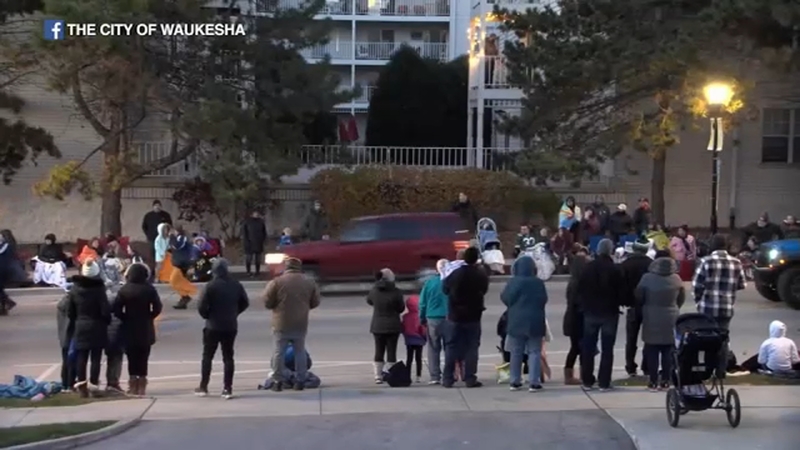 'Some fatalities,' more than 20 injured after SUV plows into Wisconsin holiday parade: police

WAUKESHA, Wis. (WLS) -- A least one person is dead and more than 20 others injured after an SUV plowed into a Christmas parade in suburban Milwaukee, according to Waukesha police.

The mayor of Waukesha, Wisconsin, confirmed the incident Sunday night.

"Today our community faced horror and tragedy in what should have been a community celebration," said Mayor Shawn Reilly.

Officials give an update after an SUV sped into a Christmas parade in suburban Milwaukee, injuring more than 20.

"We saw him swerve right into the the children from the baseball team. The parents that were marching with them, the one father of the baseball team, had pushed his child out of the way and he took the blunt end of the vehicle. He went down and all chaos just erupted," said witness, Mark Liepski.

The City of Waukesha had a fire engine as part of the parade and responded as soon as calls started coming in, fire officials said.

"Some of the individuals are children and are some fatalities as a result of this incident," the police chief said.

The city fire department transported a total of 11 adults and 12 pediatric patients to six area hospitals, officials said. They did not release information regarding specifics of injuries.

"I've never seen anything like this before in my life and never want to see it again. It was just horrific," Liepski added. "Watching the poor kids on the back of that truck scream for their mom and dad."

Police also did not specify at this time how many people may have been killed.

One group from the parade, the "Milwaukee Dancing Grannies" posted to Facebook saying: "Thank you for your concern about the Milwaukee Dancing Grannies. Members of the group and volunteers were impacted and we are waiting for word on their conditions. Please keep the Grannies, all those injured, and all those who witnessed this horrible event in your thoughts and prayers."

An officer also discharged his weapon at the suspected vehicle to try and stop it but no bystanders were injured by the gunfire, Thompson added.

"To the families involved, you are in the Waukesha Police Department's thoughts and prayers. To the Waukesha community, this scene is now safe and secure," the chief said.

Police said there is no current danger to the public.

Police in Waukesha were urging people to avoid the downtown area Sunday night.

Angelito Tenorio, a West Allis alderman who is running for Wisconsin state treasurer, told the Milwaukee Journal Sentinel that he was watching the parade with his family when they saw the SUV come speeding into the area.

"Then we heard a loud bang, and just deafening cries and screams from people who are who are struck by the vehicle," Tenorio said. "And then, and then we saw people running away or stopping crying, and there, there are people on the ground who looked like they'd been hit by the vehicle."

Wisconsin Governor Tony Evers posted to Twitter saying: "Kathy and I are praying for Waukesha tonight and all the kids, families, and community members affected by this senseless act. I'm grateful for the first responders and folks who acted quickly to help, and we are in contact with local partners as we await more information."

Kathy and I are praying for Waukesha tonight and all the kids, families, and community members affected by this senseless act. I'm grateful for the first responders and folks who acted quickly to help, and we are in contact with local partners as we await more information.

Police said they have recovered the suspected vehicle and a person of interest is in custody.

"The FBI Milwaukee field office is aware of the reporting of an incident in Waukesha. The local and state authorities are leading the response," an FBI spokesperson said.

"It is unknown at this time if the incident has any connection to terrorism," Thompson said.

An investigation is ongoing and the White House said they are closely watching the situation.

The community in now in mourning, with Waukesha public schools canceling class and making counselors available for all students 4K-12 in wake of the incident.

"Several of our administrative staff and principals met this evening following the tragic event that occurred at the City of Waukesha Christmas Parade. At this time, we are working with the police department to more fully comprehend all of the tragic details of this unfortunate event. As a result of this situation, school will be canceled on Monday, November 22, 2021, for all students in grades 4K - 12. Additionally, the District will have additional counselors available during the school day at all buildings for all students that may be in need of support services. A decision on school for Tuesday will be determined during the day on Monday. Our thoughts are with everyone impacted, with all who witnessed the event, and with our entire community," the district said in a statement.

There is also a family reception center at Waukesha South. If you are looking for family members and live out of town, please call 262-548-7122.