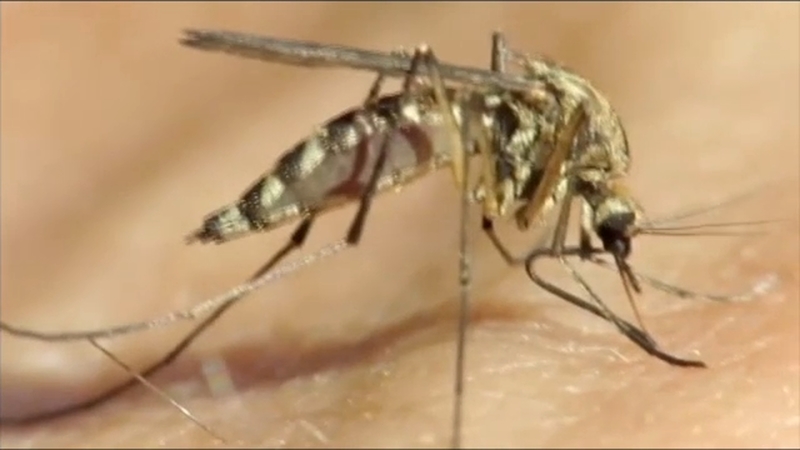 CHICAGO (WLS) -- The first human case of West Nile Virus has been confirmed in Illinois for 2019.

A Chicago man in his 70's got sick late last month, according to the Illinois Department of Public Health.

"Although the first human case of West Nile virus this year in Illinois has been reported a little later than we typically see, it is important to remember that there is an ongoing risk of disease from a mosquito bite," said IDPH Director Dr. Ngozi Ezike. "West Nile virus can cause serious illness in some people so it's important that you take precautions like wearing insect repellent and getting rid of stagnant water around your home."

The virus is transmitted through mosquitoes. Common symptoms include fever, nausea, headache and muscle aches, according to health officials. Symptoms may last from a few days to a few weeks.

Health officials said four out of five people infected with the virus will not show any symptoms. They also said in rare cases, severe illness including meningitis, or even death, can occur.

People older than 60 and individuals with weakened immune systems are at higher risks for sever illness from West Nile, according to IDPH.

Doctors are reminding everyone to protect themselves.

To "fight the bite," officials said to practice the three "R's" - reduce, repel, and report.

Reduce: make sure doors and windows have tight-fitting screens. Repair or replace screens that have tears or other openings. Try to keep doors and windows shut. Also eliminate, or refresh each week, all sources of standing water where mosquitos can breed, including water in bird baths, ponds, flowerpots, wading pools, old tires, and any other containers.

Repel: when outdoors, wear shoes and socks, long pants and a long-sleeved shirt, and apply insect repellent that contains DEET, picaridin, oil of lemon eucalyptus, or IR 3535 according to label instructions. Consult a physician before using repellents on infants.

Report: report locations where you see water sitting stagnant for more than a week such as roadside ditches, flooded yards, and similar locations that may produce mosquitoes. The local health department or city government may be able to add larvicide to the water, which will kill any mosquito larvae.