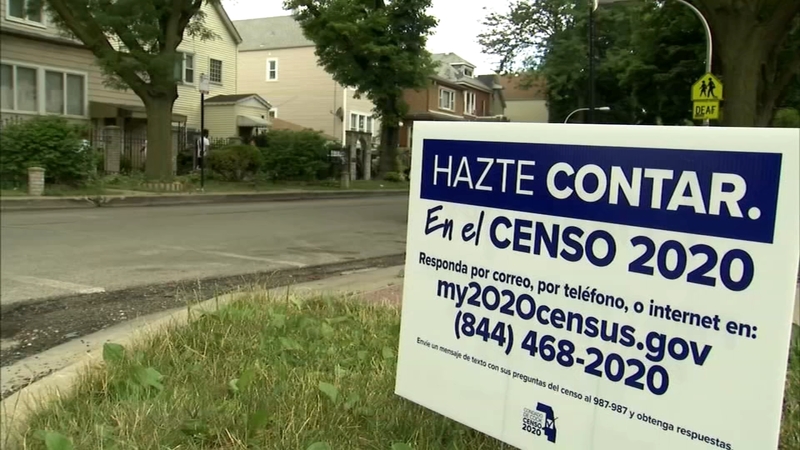 CHICAGO (WLS) -- The city of Chicago has a lower census response rate than the rest of the state and the country, according to the U.S. Census Bureau.

Billions of federal dollars are on the line.

Groups on the South and West sides are working to make sure everyone's counted in communities that could miss out the most.

Luz Maria Cortez and her team spent Thursday afternoon canvassing home after home in the Brighton Park neighborhood, leaving flyers and yard signs, with one mission.

She and other Increase the Peace members canvassed during a census outreach day.

They want everyone to be counted on the West and South sides of the city, where some neighborhoods have fewer than half of homes responding to the census, according to Cook County data.

"If we want to decrease the violence, if we want to increase the peace, we need to make ourselves count, take the census, and make sure the resources are coming into our communities," 18-year-old Diego Garcia said.

The census is the very foundation of where public money and resources go. Census data is used to determine where to build schools, and how big they need to be, where to place libraries, and where to place lifesaving services like fire departments and hospitals -- just to name a few.

And if you miss this chance now, you won't have another one for a decade.

"If we get an inaccurate count of a community, and specifically there in Chicago, then decision-makers have a void, a 10-year gap of misinformation," said Michael Cook, with the U.S. Census Bureau.

And according to the bureau, the city of Chicago's census response rate is 54.9%. That's 7% less than the national average of 62.1%.

"The current situation underscores the need for accurate census data, given COVID-19; you look at emergency preparedness, you look at healthcare, those things are directly impacted," Cook said.

And none of that information is given to U.S. Immigration and Customs Enforcement or other enforcement agencies. Cook said the census is safe. It's all about, "invaluable funding as well as political representation for the next 10 years," Cook said.

The deadline to fill out the census is Oct. 31. Census takers will begin canvassing communities across the country on Aug. 11.