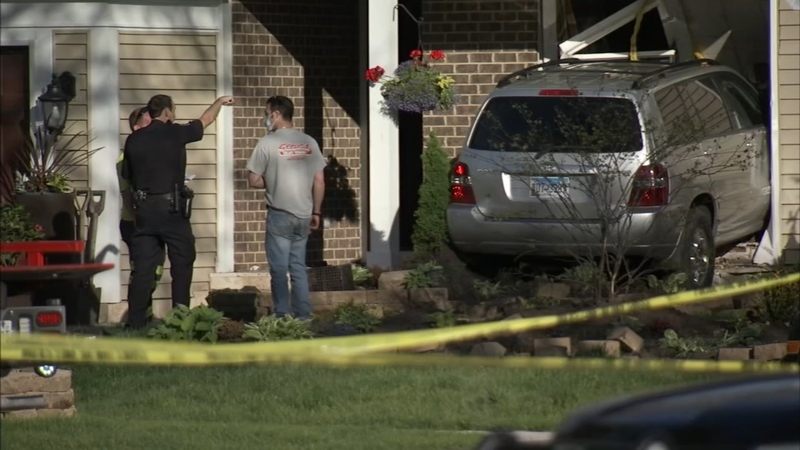 WHEELING, Ill. (WLS) -- The pedestrian killed in a hit-and-run in northwest suburban Wheeling that involved an SUV crashing into a home has been identified as a 31-year-old Chicago man.

An SUV struck and killed a pedestrian, then crashed into a home Wednesday morning, police said.

When police arrived, they saw the SUV partially lodged in the front entryway of a home in the block. No one was inside the car.

Wheeling police and fire crews responded just before 7:40 a.m. to a report of a vehicle driving into a house in the 700-block of Equestrian Drive. When police arrived, they saw the SUV partially lodged in the front entryway of a home in the block. No one was inside the car.

Audio recordings of the dispatch alerted EMTs that a person was reportedly trapped under the car. That person was identified Thursday as Carlos Maciel-Pulido.

"Be advised, residents are saying, witnesses are saying that he may have hit a pedestrian and then went into the house," the dispatcher tells first responders. "Just be advised, we may have somebody under the car."

Witnesses told police the driver fled the scene after hitting the home.

K-9 units searched the area immediately surrounding the neighborhood, which straddles the line between Wheeling and Prospect Heights.

Wheeling police are searching for the driver of a vehicle that struck and killed a pedestrian before driving into a home.

One resident of the home was inside during the crash but was not injured. Neighbors said a mother and daughter live there.

"My neighbor is fine and her daughter is fine, thank God," neighbor Correen Flynn said.

"She was actually standing in the room that the vehicle came in," said Renee Doktorczyk, another neighbor. "It was her home office. And she was standing in the office at the time, but she was not injured."

"I think somebody might have been chasing somebody, but we don't know; that's what we're hearing," Flynn said.

Neighbors said the driver fled on foot but not before one of their fellow neighbors attempted to chase him down.

"Chased this man through the neighborhood and down the street to see if he could catch him. They fought. He was hit, physically, with a fist," Dokotorczyk said. "He did not catch him. The man ended up escaping through a couple houses and over a fence. And then he lost him over the fence."

The incident drew a large police response to the normally quiet neighborhood near Elmhurst and Equestrian roads Wednesday.

The SUV was towed from the scene Wednesday evening and is now in Wheeling police custody, but the suspect is not, and that's unnerving for some.

"We have someone going, roaming through the neighborhood, and I don't know if he is safe or not," said one neighbor.