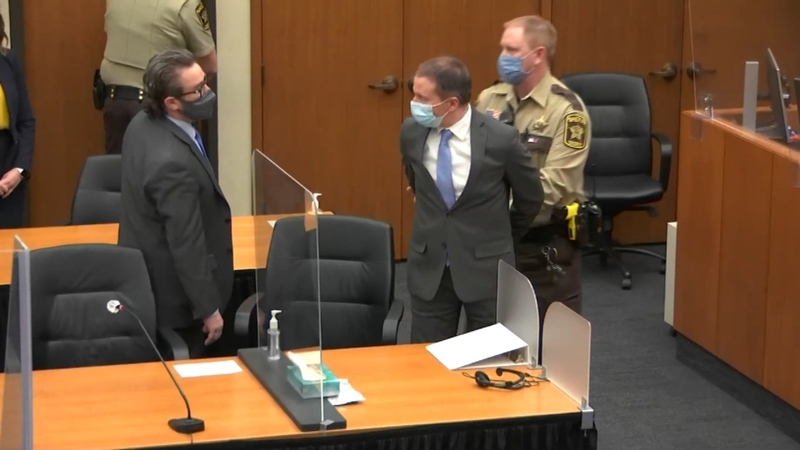 Derek Chauvin guilty on all counts

CHICAGO (WLS) -- The streets were quiet in Chicago after former Minneapolis police officer Derek Chauvin was convicted of murder in the death of George Floyd, with the overwhelming sentiment expressed appearing to be relief and righteousness.

A small group of people gathered in Daley Plaza downtown in anticipation of the verdict. While they were heartened by the guilty verdicts, they said true justice in America requires more than just one conviction.

The Chicago Alliance Against Racism and Political Repression organized the rally, saying they had planned to gather after the verdict regardless of what the jury decided.

They said this is a moment that is bigger than George Floyd, Derek Chauvin, or Minneapolis, and they hope people in Chicago reflect on what they say is badly needed police reform in the city.

The group is also planning a rally at 9 a.m. Wednesday across from City Hall, calling on the Chicago City Council to pass an ordinance that would give communities more say in policing in their neighborhoods.

Chicago spent months preparing for any possible outcome in response to the Derek Chauvin verdict, but so far, it appears to have all been precautionary.

Some people said they had stomach pains as they awaited the verdict, and many told ABC7 Eyewitness News they felt a sense of anticipation and dread, regardless of what the verdict turned out to be.

Rev. Martin Hunter, Laquan McDonald's great uncle, was also closely watching the jury's decision. He knows how a video can not only sway public opinion, but also convince a jury to convict a police officer.

"We now have another police officer charged and convicted for what he has done to a Black man in America. This is again the beginning of a new era in policing. We still have a long way to go in this country," he said.

McDonald was shot 16 times by former Chicago police officer Jason Van Dyke in 2014. After citywide outcry and more than a year of work by journalists and activists, police released dashcam video of the incident, which proved instrumental in charging Van Dyke with first degree murder and 16 counts of aggravated battery with a firearm. Van Dyke was convicted of second degree murder and all counts of aggravated battery, and was sentenced to six years and nine months in prison for McDonald's murder.

Hunter also said as he was watching the verdict be read, he teared up and realized he had never been able to grieve for his great-nephew.

The verdict was widely praised by politicians as being a step in the right direction.

"I'm honestly relieved because I feel like justice was actually blind on this, they didn't see color, they saw actually what happened," said 20th Ward Alderman Jeanette Taylor.

The verdict in the Derek Chauvin case is being widely praised by local politicans as at least a step in the right direction.

"And in this same time, we felt a tidal wave of civil uprising following the murder of George Floyd and today, ladies and gentlemen, justice there was served," she said.

Gov. Pritzker tweeted shortly after the verdict was read, saying, "No courtroom can ever replace a life, but it can and should deliver justice. Today, the jury in Derek Chauvin's murder trial honored that truth."

No courtroom can ever replace a life, but it can and should deliver justice. Today, the jury in Derek Chauvin’s murder trial honored that truth.

Lt. Gov. Juliana Stratton released a statement reacting to the verdict, saying in part, "Now, in Minneapolis, a diverse jury of men and women with various lived experiences have handed down a guilty verdict that tells this nation, and the world, that the humanity of Black people matters. Finally, this is what accountability looks like. But make no mistake, George Floyd should be alive today and the system still needs to change."

Former President Barack Obama and Michelle Obama said in part, "Today a jury in Minneapolis did the right thing."

Illinois Attorney General Kwame Raoul issued a statement, saying in part, "Today justice was served, and I hope this verdict brings some measure of peace to the family and friends of George Floyd, and allows them to begin recovering not just from Floyd's tragic death but also from the trauma of the trial. I am also hopeful that this verdict will begin the healing our country needs."

Illinois House Republican Leader Jim Durkin said, "While today's verdict won't bring back the life of George Floyd, it delivers a powerful statement that no one is above the law."

Some Chicago activists who spoke to ABC7 said they are celebrating after Derek Chauvin was convicted while vowing to continue fighting injustice.

The verdict also gives further momentum to those calling for police reform.

"We need to recognize that this is justice for George Floyd, but we've got to do more to prevent future cases like this one," said 35th Ward Alderman Carlos Ramirez-Rosa.

"Hopefully this is not going to keep happening, you know, maybe this will help, but also we're hoping as members of Congress that we pass a torch for justice and policing," said Rep. Robin Kelly (D-Chicago), Illinois Democratic Party Chairwoman.

Activists are promising to keep marching ahead in their fight.

"We have to do everything in our power to push against the system of oppression and police are the protectors of that oppression," said LaSaia Wade, executive director, Brave Space Alliance.

One year ago, Williams gave a speech at the culmination of a Black Lives Matter protest on the Northwest Side. He spoke to a group of mostly white, young protesters and pled with them to be activists in their own homes, with their parents and grandparents. In reaction to the verdicts, Williams promoted the same message.

"At some point, you've got to be the voice for Black people in your household," Williams said. "And it has to start today."

Chicago's Fraternal Order of Police President John Catanzara said he doesn't agree with any of the tactics Chauvin used that day and was not surprised by the guilty verdict.

"It was justified use of force until the point that Mr. Floyd stopped breathing. Then it became excessive. It really is that cut and dry," Catanzara said. "The perception that this is some epidemic nationwide - it just has to stop."

Catanzara said this sends a message to police that if they go over the line, they'll get tried and convicted.

National Guard called in, downtown businesses board up ahead of verdict

Many downtown Chicago businesses were already boarded up early Tuesday morning. At the request of Mayor Lori Lightfoot, Pritzker said he will deploy 125 National Guard members to stand by to support the Chicago Police Department beginning Tuesday.

With a verdict expected in the Derek Chauvin trial, I'm putting @IL_Natl_Guard on standby at the request of @chicagosmayor. It's critical that those who wish to peacefully protest against the systemic racism and injustice in our communities continue to be able to do so. https://t.co/gb9BOCTZXK

Soldiers assigned are from the 33rd Military Police Battalion and are specially trained in riot control operations, the statement said.

ISP told the I-Team they're in contact with the Chicago Police Department to help with peaceful protests and keep the community safe. They have not been asked to help in Minnesota, like some other nearby states have.

Some businesses along the Magnificent Mile and elsewhere in the city have been boarded up since last Thursday, when video of the fatal Chicago police shooting of 13-year-old Adam Toledo was released.

Chicago's Office of Emergency Management and Communications also prepared for the jury's decision, but said there's "no actionable intelligence at this time."

"It means having the National Guard in place to do crowd control and traffic control, if necessary. It means having trained police officers who have been practicing for events like this, who now know what the appropriate response is to civil disobedience, whether it's looting or whether it's a protest that gets out of control," Hopkins said.

Lightfoot commented on her request for guard troops at an unrelated news conference Tuesday morning, saying "we learned a lot over the course of last summer and fall about additional things we needed to be doing. Last week we activated our neighborhood protection plan, which puts officers on high alert. They are very visible."

Black and Latinx organizers condemned the mayor's plan to install National Guard troops ahead of the verdict.

They said protesters who marched last Friday night, outraged over the police killing of Toledo, were treated with a heavy hand by officers, and they believe that's how protesters would be treated in the wake of any potential verdict of the Chauvin case.

"Last Friday, during peaceful protests that occurred, we saw clear indications that CPD plans to respond to protests that arise from the Adam Toledo and the George Floyd verdict with the same violence and racism," Sheila Bed said.

Hopkins said there's "no actionable intelligence at this time" of anything expected to happen downtown.

He also said the National Guard is stationed out-of-sight close by so they can respond within minutes.