WLS
By Michelle Gallardo
EAST TROY, Wis. (WLS) -- A third body has been recovered by dive teams searching for the bodies of a group of four Illinois men on Lake Beulah near East Troy, Wis., about 90 miles north of Chicago. The bodies of two other men were found Sunday. Walworth County authorities said a search for the fourth man's body will resume Tuesday morning.

Divers with sonar equipment and a police helicopter were redeployed Monday, Walworth County Sheriff Kurt Picknell said. Waukesha and Racine county divers are assisting, so that teams can rotate. They searched water Monday that was no deeper than 25 feet and around 34 degrees - on the verge of making ice.
EMBED More News Videos

A third body has been recovered by Walworth County dive teams searching for the bodies of a group of four Illinois men on Lake Beulah.

Officials at New Trier High School in north suburban Winnetka said Monday that all four victims appear to have been former students.

"Our deepest condolences are extended to the families and friends as they cope with this tragic loss. We will release a more detailed statement when the victims' names become public," Superintendent Dr. Linda Yonke said in a statement.

At the Strike Zone Baseball and Softball Academy in Glenview, the boss of one of the victims, Patrick Sack, had to share the sad news of his death with the children he coached.

"They're all devastated, we're all devastated. Just a great, young kid, bright future. We loved having him here and he's going to be missed, really, really missed," said John Fix, Strike Zone owner.

Sack loved baseball and recently became a coach himself to children 13 and under.

"I don't know anybody that didn't like him. He was the type of kid, if you mentioned his name, everybody just smiled," said Paul Kosinski, a friend.

Sack started taking lessons at the Strike Zone at age 15 and he impressed everyone so much, that he was offered his first job there just two years later while he was still attending New Trier. After he went away to college in Kansas, he still came back to help out in the summer.

"I think is felt throughout the whole school. We're a really big school. But when something affects us this closely, it really hits home," said Sally Kozminski, a New Trier student.

"I couldn't believe it. No way that something like that could have happened, especially this local. People that I know were directly affected. It was sad to hear about," said Lauren Hancock, another New Trier student.

Police said the four missing were part of a larger group of friends spending time at a lake house. The missing were last seen leaving a home on Mill Lake, near Lake Beulah, around 2:30 a.m. Sunday. When the four men never returned to the house, their friends called for help.

Jason Roberts, of the Wisconsin Department of Natural Resources conservation board, said the victims' friends saw tracks in the snow leading to a boat house and found a canoe was missing. They walked to the shoreline and saw what looked like an overturned canoe on the lake.

Within two hours of mobilizing the search, Roberts said dive teams found two bodies, a green canoe and signs of broken ice. There were no life jackets floating on the water or on the victims.

Roberts said "drinking was involved," but investigators have not determined whether alcohol was a contributing factor. Investigators also said the 14-foot canoe they took onto the water was meant to hold only three people. 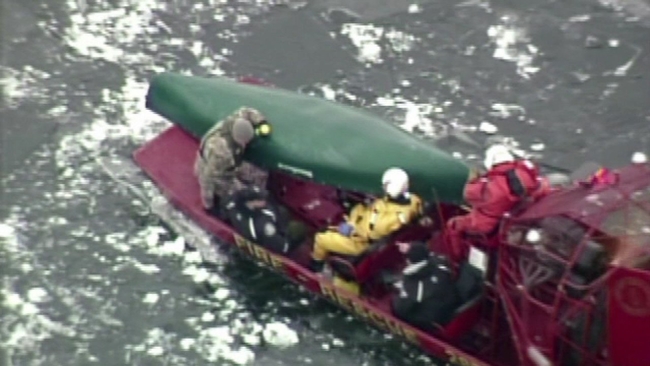