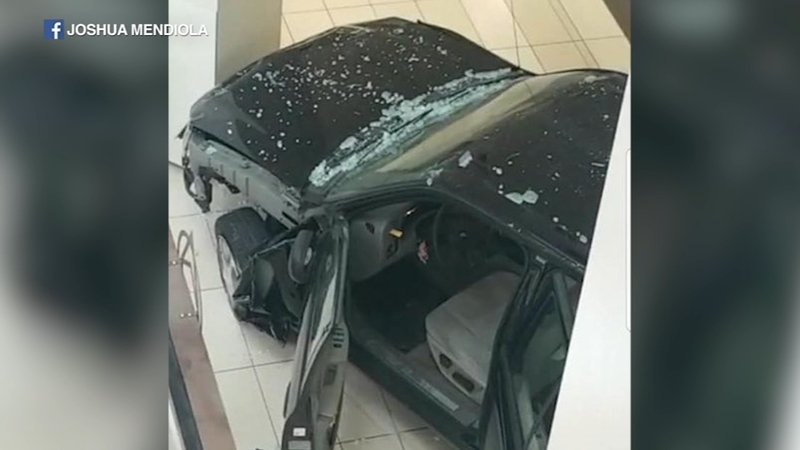 EMBED <>More Videos
SCHAUMBURG, Ill. (WLS) -- One person is in custody after an SUV crashed into the Sears at Woodfield Mall in Schuamburg and then drove through the shopping center Friday afternoon, police said.

Schaumburg police said they began receiving 911 calls about the incident around 2:21 p.m. Police said the SUV entered the mall by Sears and Rainforest Cafe, then drove through the common area and came to a final stop in the mall's center court. Witnesses said the SUV crashed into a pillar.

Three people were transported with very minor injuries, Schaumburg police said. No major injuries were reported, though witnesses reported at one point the SUV almost struck a group of children. Police said no one was injured by being struck by the car itself.

The ABC7 I-Team spoke to the father of the suspected driver of the SUV that drove through the Woodfield Mall Friday.

The ABC7 I-Team spoke to the family of the suspected driver, who is from Palatine. The man's father said he has a health condition that requires medication, but did not say what the condition is. The man is currently being questioned at Schaumburg police headquarters.

Schaumburg police said there is no indication that this was a terrorist attack. Police said they have not had prior contact with the suspected driver.

Panic erupted at Woodfield Mall in Schaumburg Friday afternoon when an SUV crashed into Sears and drove through the mall.

Anthony Uchick was shopping with his mother at the Sears in Schaumburg's Woodfield Mall Friday when he said a car crashed through the storefront and proceeded to drive through the shopping center.

Anthony Uchick was shopping at the Sears in Schaumburg's Woodfield Mall Friday when he said a car crashed into the storefront and proceeded to drive through the shopping center.

Uchick said the vehicle exited Sears near the Rainforest Cafe, almost striking children nearby. The car then crashed into Forever 21 before driving down toward Macy's, where the driver was taken into custody, he said.

Lateef Farooqui was sitting in the second floor food court at the time, and said he saw car parts scattered through first floor's center aisle, but wasn't sure if the car was targeting any store in particular.

"Yeah, it was like a pinball going right to left," he said. "I don't know if it was like an anger issue going after Forever 21, but that one was the most obvious one he went through. And then he backed out of there and then moved to the complete opposite side."

The driver was taken into custody in a tea shop in the mall.

"They brought him into my store and apprehended him in the store," said Robert Fakhouri, an employee. "I'm not sure if it's because of the space inside and they had room and they were able to sit him down, or what happened."

Fakhouri described the driver as a younger man, possibly in his 20s, and said he was quiet and did not resist police during the arrest. He said the man answered the officers' questions with yes or no answers, and did tell officers he was alone.

He said the man appeared coherent, and displayed no remorse or emotion. He did not offer any explanation for what he allegedly did.

The employee of a tea store in Woodfield Mall describes the arrest of the suspected driver of a car that crashed into and drove through the mall Friday.

Police denied social media reports that a shooting occurred, saying there's no evidence there was ever an active shooter situation and no bullet casings were recovered in the mall. Police said what people thought were gunshots was most likely the car breaking glass inside the mall.

Mall officials released a statement saying, "The authorities believe this to be an isolated incident involving one person who has been arrested. We are grateful no one was injured, and thank our security team and the police for their quick response."

The FBI is assisting in the investigation at the request of local law enforcement, but said there is no known threat to public safety at this time.

The mall remained closed Friday night but police said they were hopeful it would reopen Saturday morning. Currently they're assessing whether there is any structural damage that would prevent the mall from reopening.