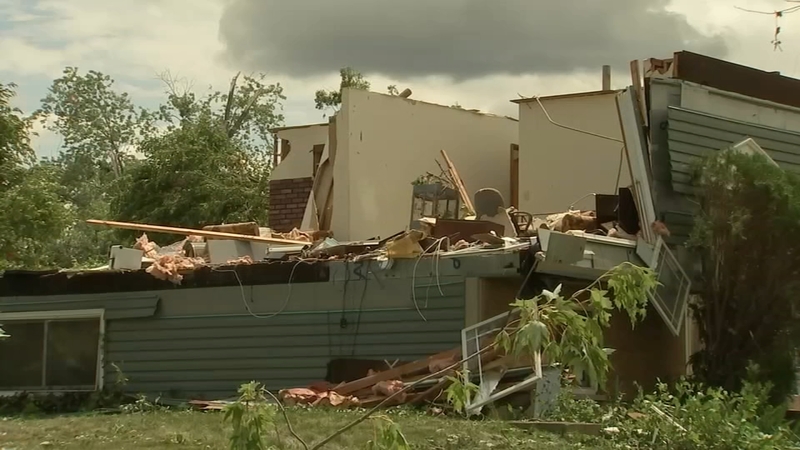 WOODRIDGE, Ill. (WLS) -- After touching down in Naperville, an EF-3 tornado ripped through Woodridge and Darien, turning people's lives upside down in seconds.

At the intersection of Woodridge and Everglade in Woodridge, many of homes sustained structural damage, making them unsafe.

"I ran downstairs. I knew something was about to happen, got my dogs, jumped into the closet," resident John Mixen said. "As I was closing the door, I could hear the house getting torn apart."

Mixen was grateful for help clearing the debris Monday, but most grateful his family was safe.

Neighbors helped clean up in Darien, where an EF-3 tornado left some partially destroyed homes, and lots of downed trees.

"Tore the roof right off, there's a piece on someone else's roof in my son's room," Mixen said. "Fortunately, my son wasn't there."

Nearby, where another house had its upper floor exposed, an elderly resident was also lucky he was not home. His caretaker said he is grateful he was recently admitted to a rehab facility and not at home with mobility challenges.

"He would have died," said his caretaker, Beverly Sedlacek. "They wouldn't have been able to get him out of here, everything is all over the place."

His caretaker said she knew it was his house when she was watching ABC7's Greg Dutra Monday morning.

"This morning, I saw the house. I saw the bird cage up there, that's how I knew," Sedlacek said. "Channel 7 at 6 in the morning. So I said, hurry up, get here and get going."

Within a few hours of learning their rectory was damaged overnight, parishioners of St Scholastica Church in Woodridge were out in force Monday morning cleaning up - and there was a lot to clean up.

"It's great to see everybody pitch in. Some people cancelled their tee times, other people stayed home from work," said Lynda Wagner, who retired from teaching at St. Scholastica School a couple weeks ago. But she was back Monday morning helping out, and grateful it wasn't worse.

"We're just so grateful our school is still standing. We will be able to come back," she said.

They are still assessing the damage at the rectory. They know for sure the trailer for the church Boy Scout troop will need to be replaced.

In Darien, neighbors were out helping the clean-up effort all day. The damage there included some partially destroyed homes, and lots of downed trees.

"The alarm went off and we had like 20 seconds to get to the basement and on the way, there was glass starting to come through," said Steve Chrastka, a Darien resident.

Down the street, a home that was vacant and about to be sold took a direct hit. It's missing a room after the high winds blew down the roof and one wall.

Many residents, however, are grateful that no one in town appeared to be seriously injured.