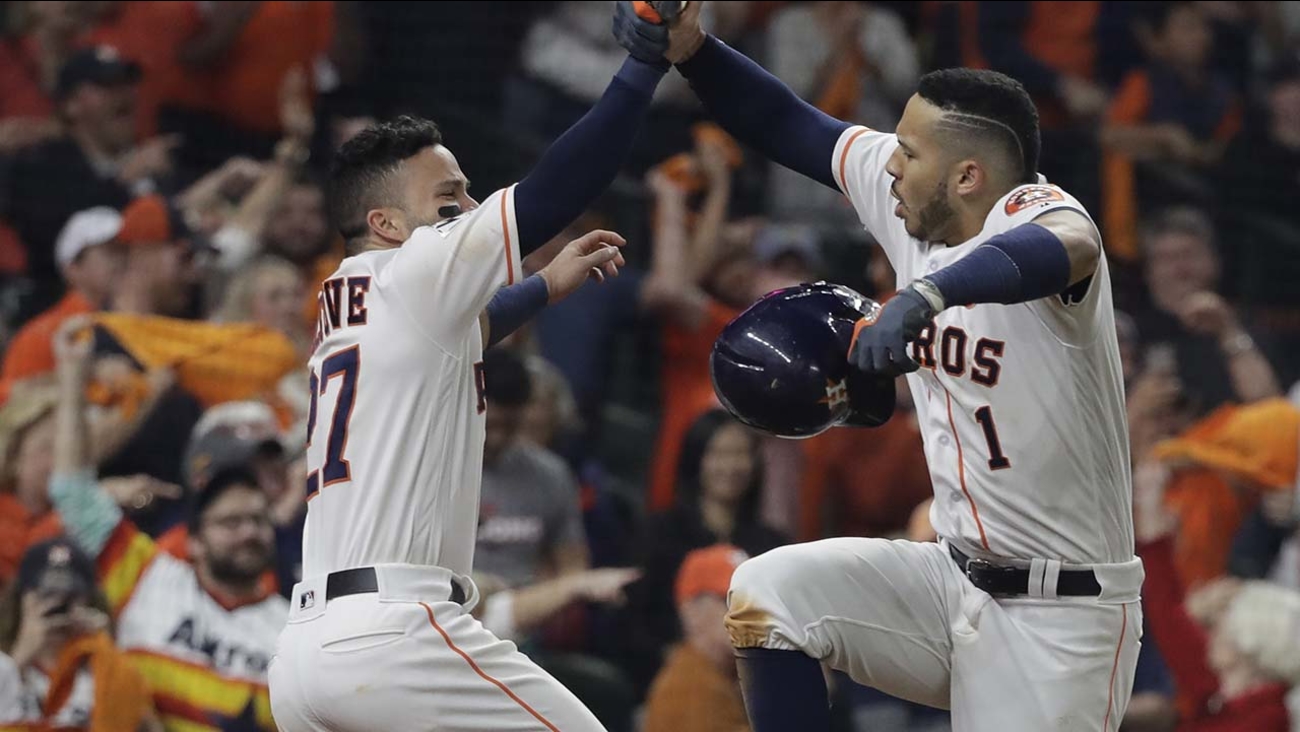 HOUSTON -- When the winning run finally came sliding across home plate on Alex Bregman's single, more than five unforgettable hours after the first pitch, a frantic Carlos Correa sprinted toward his Houston Astros teammates in the middle of the diamond.

Arm in the air, pure elation all over his face.

A last indelible image from a World Series classic filled with them.

Correa, Jose Altuve and the Astros kept hammering away in a wild slugfest that no one saw coming, rallying against Clayton Kershaw and rocking the Los Angeles Dodgers 13-12 in 10 thrilling innings Sunday night for a 3-2 lead.

"I feel like I'm going to have a heart attack out there," Correa said.

In a tension-filled game of monster momentum swings at pulsating Minute Maid Park, the last one belonged to Bregman . With the packed crowd still standing well past midnight, the 23-year-old third baseman hit an RBI single with two outs off Kenley Jansen.

"The best game ever, for sure," Correa said.

Wacky and whacky with seven home runs, this perhaps topped Toronto's 15-14 win over the Phillies in 1993 as the craziest World Series showdown ever.

"Yeah, five-hour game, but it doesn't matter. I can play a 10-hour game if we are going to win," Altuve said.

Now, with both bullpens worn down, the teams get a day to recover. Game 6 will be Tuesday night at Dodger Stadium, where Justin Verlander will try to clinch the Astros' first championship and Rich Hill hopes to save Los Angeles' season.

Altuve, Correa, Yuli Gurriel, George Springer and Brian McCann homered for Houston , the highest-scoring team in the majors this season.

Cody Bellinger and Yasiel Puig went deep for the Dodgers, who scored three times in the ninth to make it 12-all.

"It's hard to put into words all the twists and turns in that game," Astros manager A.J. Hinch said.

"These are just two really good teams, just throwing haymakers at each other trying to outlast each other," he said.

Silent when ace Dallas Keuchel got crushed, the orange-clad fans erupted over and over as the Astros sent balls careening all around - and out of - the park.

Yet on another night of Home Run Derby in the Year of the Home Run, no lead was safe.

Puig lined a two-run shot in the ninth, the record 22nd homer in a single Series, and Chris Taylor's two-out single off Chris Devenski tied it.

"I think this whole series has been an emotional roller coaster," Dodgers manager Dave Roberts said. "It's the two best teams playing for a championship. And these are two teams that play 27 outs."

More than that, in fact.

Houston posted its second extra-inning victory of the Series, adding to its 7-6, 11-inning comeback win in a dramatic Game 2.

With two down in the 10th, Jansen hit McCann on the hand with a pitch and Springer walked.

Bregman, who homered off Jansen in Saturday night's loss, lined the next pitch over shortstop to score pinch-runner Derek Fisher, who slid home ahead of the throw from left fielder Andre Ethier.

Out of nowhere, the Astros climbed out of a four-run hole against Kershaw and then erased two more deficits later in the game, tying it each time on a homer.

Correa leaped and twirled after launching a two-run drive that made it 11-8 in the seventh . Much later, he hurdled the dugout railing the moment Bregman lined his winning single.

Bellinger hit a three-run drive in the fifth that made it 7-4 and seemed to swing things back in the Dodgers' favor. By the end of the mayhem on the mound, it was a mere afterthought.

Each team had 14 hits, eight for extra bases, and both used seven pitchers.

Before the game, former Presidents George H.W. Bush and son George W. Bush were on the field for the first-pitch ceremony. By the end of the night, most everyone was bushed.

The Astros (13) and Dodgers (9) topped the Series mark for homers , set when Barry Bonds and the Giants lost to the Angels in seven games in 2002.

But really, who imagined this?

No wonder there's a bright sign high above the center field wall for a popular taco place in town - it says Torchys and fit perfectly for a game where pitchers got lit up.

A day earlier, Kershaw stood alone on the mound after the Dodgers' dramatic win in Game 4, trying to get a visual for the biggest start of his career.

This was definitely not how he pictured it.

Kershaw whipped his head around to watch Gurriel's drive sail, his face immediately showing shock, utter disbelief and frustration, all wrapped up in one expression before he bent over, hands on his knees.

Yanked in the fifth, Kershaw trudged off with a dubious distinction - he has allowed a postseason-record eight home runs this year.

"Just exactly what you expect (when you) come to the park with Keuchel and Kershaw pitching," Hinch said.

Hardly a repeat performance from the opener, when Kershaw dominated while outpitching Keuchel for a 3-1 win.

Gurriel's second homer of the Series also kept open this possibility: Imagine the scene if Major League Baseball presents Gurriel with the MVP trophy, so soon after Commissioner Rob Manfred suspended him for the first five games next year for making a racist gesture toward Dodgers pitcher Yu Darvish.

Keuchel never got into a rhythm during the shortest home start of his All-Star career. His breaking pitches spun without much movement, and he was pulled in the fourth.

The Dodgers hadn't lost a game this year when they led by four runs. But Kershaw's bedeviling postseason past came back to haunt him at the worst time.

Kershaw was pulled after a pair of two-out walks in the bottom of the fifth. And with the crowd sensing something big, the 5-foot-6 Altuve connected off Kenta Maeda for a home run that made it 7-all.

"At that point, I talked to him before getting the at-bat: 'This is your moment,'" Correa said. "And he didn't let me down. He hit a homer and got us going."
Report a correction or typo
Related topics:
sportstexascaliforniaworld serieshouston astroslos angeles dodgers
Copyright © 2021 by The Associated Press. All Rights Reserved.
More Videos
From CNN Newsource affiliates
TOP STORIES