As of 1:30 p.m. Friday, all lanes have been reopened, according to Illinois State Police
WLS
By ABC7 Chicago Digital Team 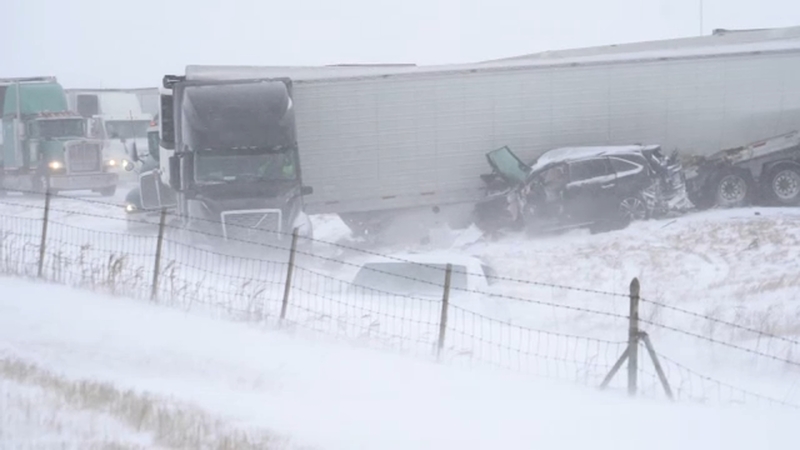 EL PASO, Ill. (WLS) -- Interstate 39 in downstate Illinois is back open after a 100-car pileup Thursday afternoon forced the roadway to be shut down.

Over 100 vehicles were involved in multiple crashes in the southbound lanes of the interstate around 3:13 p.m. Thursday near El Paso, about 50 miles east of Peoria, Illinois State Police said.

An ABC7 viewer sent us video showing a mangled mess of cars and semi-trucks as panicked drivers tried to find safety.

Raw video shows the moments after an ABC7 viewer was involved in a 100-car pileup that shut down I-39 near El Paso, Illinois.

Traffic was diverted off I-39 at El Paso (Exit 14) and onto IL 251 to bypass the crash site, Illinois State Police said.

I-39 southbound was shut down from Normal to Minonk for approximately 12 hours, according to state police.

Your afternoon commute is going to be a slow one. Please be patient as we work to clear the roads; we are being slowed by heavy traffic as well.

Whiteout conditions are a big problem also, as seen from a plow's eye view along Interstate 74 in Peoria. pic.twitter.com/dGrbSKwEhL

Illinois State Police said that a trooper was caught up in the pile-up while trying to shut down lanes. Even more cars started crashing, and a pick-up truck was pushed into the back of the trooper's SUV. Luckily, no one was hurt.

A total of 19 commercial vehicles (CMV) and nine passenger vehicles sustained damage, ISP said. Numerous other vehicles slid off the roadway but were not damaged, and several CMV loads were spilled on and around the roadways.

ISP requested a dozen tow trucks to help clear the roadway throughout the night. Troopers, as well as other local law enforcement partners, helped to safely escort all motorists from the area to warming centers.

Despite the number of vehicles involved, officials said no injures were reported.