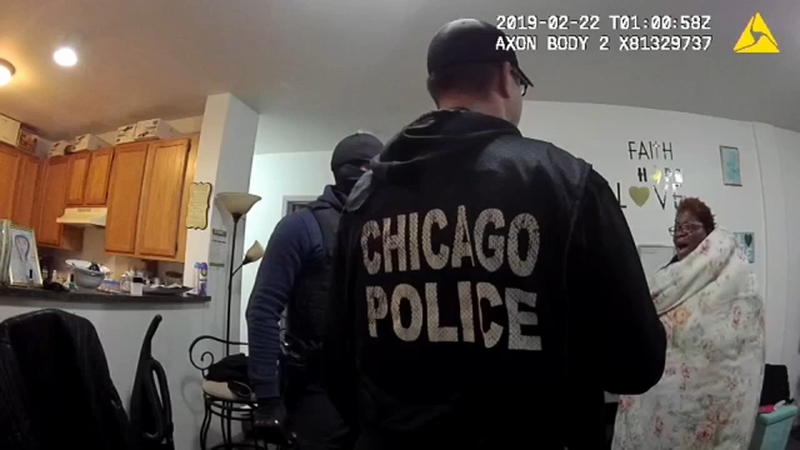 CHICAGO (WLS) -- The attorney for a Chicago woman whose house was wrongfully raided in February 2019 will not be punished for releasing video of the incident.

A federal judge decided not to punish Keenan Saulter, Anjanette Young's attorney, after he released video of Chicago police wrongfully handcuffing Young, while she was naked in her home.

The judge acknowledged Saulter violated a court order, but the judge agreed Saulter did so because he thought the video was being improperly withheld from the public.

Mayor Lori Lightfoot met with Young as activists called for her resignation in late December.

The botched raid on Anjanette Young's home happened in February of 2019. The Chicago social worker was left handcuffed and naked for 40 minutes.

Mayor Lightfoot's office and Young's attorney issued a joint statement on their Thursday morning meeting: "Today we met and had a lengthy, very candid and productive conversation about the unacceptable raid on Ms. Young's house and her pain. We also discussed a number of systemic changes necessary to address the wrongs done not only to Ms. Young, but also to other victims. We both acknowledge that today's conversation, was but a step towards Ms. Young's healing. Today's conversation was not a resolution to the problematic issues that both parties acknowledge exist-which led to the events of February 21, 2019 at Ms. Young's home. However, there could be no resolution without first engaging in a substantive conversation. We are both committed to continuing to identify areas of common ground relating to these issues and to working towards necessary policy changes together."

Some local pastors are ramping up the pressure for change in the wake of the mistaken police raid on a Chicago social worker.