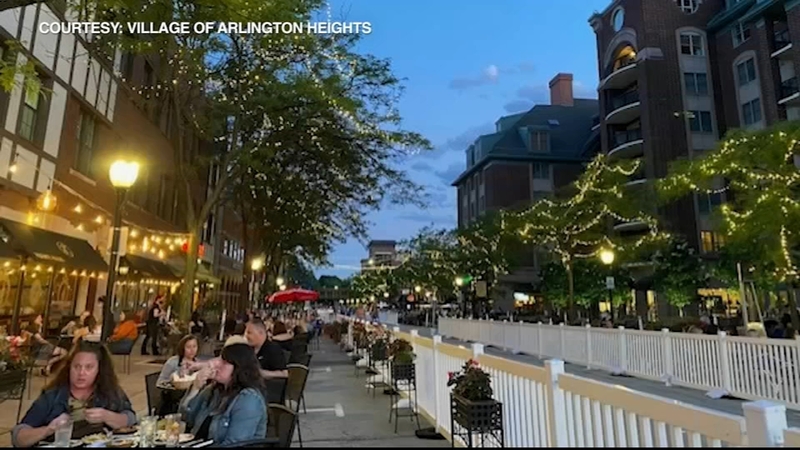 ARLINGTON HEIGHTS, Ill. (WLS) -- When outdoor dining returns to some restaurants in downtown Arlington Heights, diners there will be paying extra for it.

The village's new "alfresco" food and beverage tax is an idea that's been simmering for a while with the success of Arlington Alfresco. It began as a way to showcase the village's restaurants and bars, but quickly became a way help businesses get through the pandemic.

"If the village needs to tax the communities to keep it going, we're all for it," said Peter Favia at Arman's Restaurant.

The tax was unanimously approved by the village board Tuesday night and adds an extra 0.75% tax onto bills, on top of the current 1.25% village food and beverage tax.

"And we felt that was a fair way to do it," Arlington Heights village manager Randy Recklaus said. "Many of the patrons don't live in town and we think they should pay their fair share of this event as well."

Starting February 1, patrons of the roughly dozen restaurants and bars near Vail and Campbell will begin to see the extra charge on their bills year-round. That's about an extra $0.75 on a $100 meal or about $0.08 more on a $10 drink.

"The restaurant businesses have suffered a lot through COVID, so I would be okay with it," diner Brenda Morales said.

"I think it's really going to help to keep restaurants going," diner Joe Colangelo said. "Pay a little bit extra, I think will be well worth it."

Village officials say the tax will generate over $100,000 a year. Revenue from the new tax will help cover the cost of closing off the streets, providing entertainment, and the cost of security and cleanup for Arlington Alfresco.

Arlington Heights residents think the "alfresco tax" is a great idea and aren't too worried about neighborhood restaurants and bars losing customers.

"There's always going to be some people who don't want to pay that extra, so maybe they don't come out," Arlington Heights resident Michael Hemphill said. "Then there's another table for us."