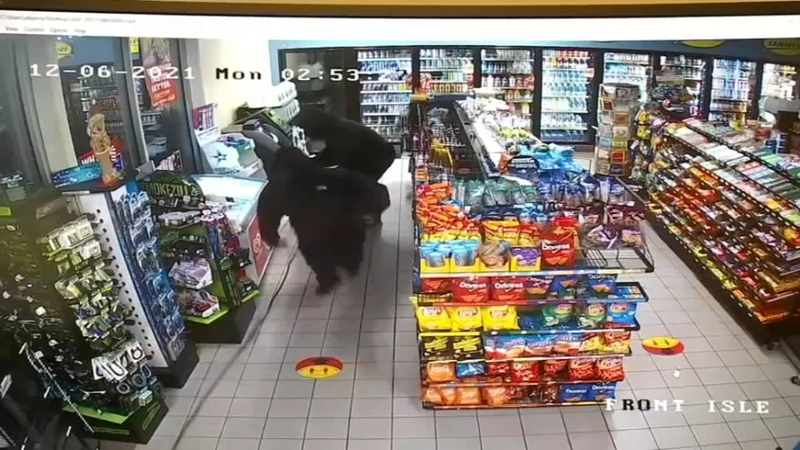 OLD SAYBROOK, Conn. -- Police in Connecticut are investigating a string of ATM robberies.

One of the robberies was captured on surveillance video, WFSB reported. Police said the precession and timing with which they did it, shows that these were pros. They knew what they were doing and they clearly have done it before, police said.

Video showed the Henny Penny in Old Saybrook targeted around 3:00 a.m., when the store was closed. Two men entered the store, wrapped a cable wire around the ATM and ripped it right out of the store. The whole thing happened in seconds.

"The teamwork that they use is kind of incredible," said Old Saybrook Police Captain Jeffrey DePerry. "They coil the rope up, throw it into the back of the stolen Range Rover and they are out in a little over a minute."

There is another angle the men can be seen prying open the door. One man held the door open as the other two men ran inside. A fourth man drove a stolen Range Rover, hitting the gas. The force pulled the ATM out and collapsed the doors off the frame.

They hit two more convenience stores on the shoreline.

"After Old Saybrook, the same vehicle with the same individuals did do the same type or similar crime in the town of Essex and the town of Old Lyme," DePerry said.

The SUV was stolen from a car dealership in East Windsor a week prior. Since then, it was used in a carjacking in Cromwell, an armed robbery at a gas station in Meriden and ATM thefts in East Haven and Old Saybrook. The men attempted to steal ATMs from a Cumberland Farms in Essex and from a gas station in Old Lyme, but were unable to rip them out.

Surveillance cameras did get a license plate on the range rover. It is grey and has Connecticut dealer plates DA5154. Police said anyone who sees the car should contact authorities.