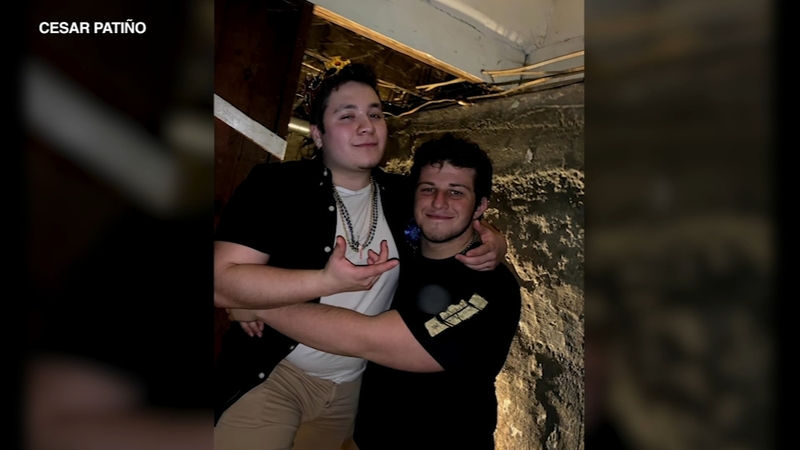 CHICAGO (WLS) -- Vigils will honor two best friends, who were also Naperville natives, who are among the people killed during Travis Scott's Astroworld music festival in Houston, Texas.

Jacob "Jake" Jurinek, 20, and Franco Patiño, 21, attended the concert together, who were there for Jurinek's birthday. Both lost their lives when chaos erupted during Scott's performance. At least six others were also killed and hundreds of people were injured, according to officials.

"It's something that could have been completely avoided if they had more appreciation for the value of human life," said Daniel Dally, best friend to both men.

Dally met Patiño and Jurinek at Neuqua Valley High School, where they were on the football team. The three remained close after graduating.

"He loved to engage and discuss," said SIU professor Bridget Lescelius. "And wouldn't take things at face value. And I loved that. I teach advertising. Advertising is creativity and he was so creative."

"He was the center of attention in every room that he was in, for good reason," Dally said. "He was always loud and cracking jokes.

Patiño was a University of Dayton student, majoring in mechanical engineering technology with a minor in human movement biomechanics, according to the university. He was also a member of Alpha Psi Lambda, a Hispanic interest fraternity, as well as a member of the Society of Hispanic Professional Engineers at UD, active in the ETHOS program and was working in an engineering co-op program in Mason, Ohio, according to the university.

Dally said Patiño was like a brother to him, and helped him through bouts of depression.

"It could be 2 a.m. and I could call him and say, 'Can we go to McDonald's' or something. 'Can we go for a drive' and he would without hesitation," Dally said.

SIU held a vigil for Jurinek at their Carbondale campus. There were hugs and tears among classmates and friends.

The University of Dayton is also planning a tribute to Patiño.

Nequa Valley HS Principal Dr. Lance Fuhrer said in a statement,"Our school community is saddened by the tragic loss of two former Neuqua Valley students - Jacob Jurinek, Class of 2019 and Franco Patino, Class of 2018. We are supporting our students and staff who knew these two young men and offer our deepest condolences to their families. We honor their friendship that has roots at Neuqua Valley and grieve alongside the communities of both the University of Dayton and Southern Illinois University."

The school is now offering support to its students and staff.

"Our community is very sad," Neuqua Valley HS parent Becky Pantano. "It's heartbreaking. You feel it as we just drove through the neighborhood today. And you just feel the loss when you think of this family and what they must be going through when they got the phone call. It's heartbreaking."

"He was talking to everyone how excited he was to see, to be there, to go," said Julio Patiño, the victim's brother. "He was saving up money to go with his best friend Jacob."

Patiño and Jurinek remained close after high school, even after going to different colleges.

Relatives of Franco Patiño watched his last moments play out on social media, with one image showing him being helped by a perfect stranger.

"He was not alone," said Teresita Patiño, the victim's mother. "That one beautiful soul was able to give him help. Hold his hand. Hear his human voice."

Naperville natives and best friends, Jacob "Jake" Jurinek and Franco Patiño, were both among at least eight killed during crowd surge at the Astroworld music festival.

"I can just imagine how scared he was. If I could talk to him right now, I would just tell him, 'Hey bro. It's OK.' He can go to Heaven. We will be OK here," Julio said.

Patiño's father described his son as a charismatic, energetic leader who was active in his community and intent on helping people with disabilities.

He said his son was working with a team on a new medical device, and that he wanted to find a way to help his mother walk again after she was severely injured in an automobile accident in Mexico two years ago, he told the Associated Press.

Patino described how his son - who enjoyed weight lifting, football and rugby - used his strength to break a door and free his mom from the wreckage.

"He loved his mom," Patino said. "He said everything that he was doing, it was trying to help his mom. The entire goal."

SIU Carbondale released a statement on the death of Jurinek.

"We are brokenhearted to lose a member of the Saluki family, Jacob Jurinek, and we extend our deepest condolences to his family and friends. Jacob was a creative, intelligent young man, with a promising career in journalism and advertising. We understand this comes as a shock to many of our students. If they have mental health concerns, Counseling and Psychological Services (CAPS) is available to help them by calling 618-453-5371. As we mourn this loss in our community, we will keep Jacob's family and friends in our thoughts." said Austin Lane, chancellor of Southern Illinois University Carbondale.

"He loved to engage and discuss, and wouldn't take things at face value, and I loved that. I teach advertising. Advertising is creativity and he was so creative. He wasn't afraid to be wrong. He would take discussions in all different directions," Lescelius said.