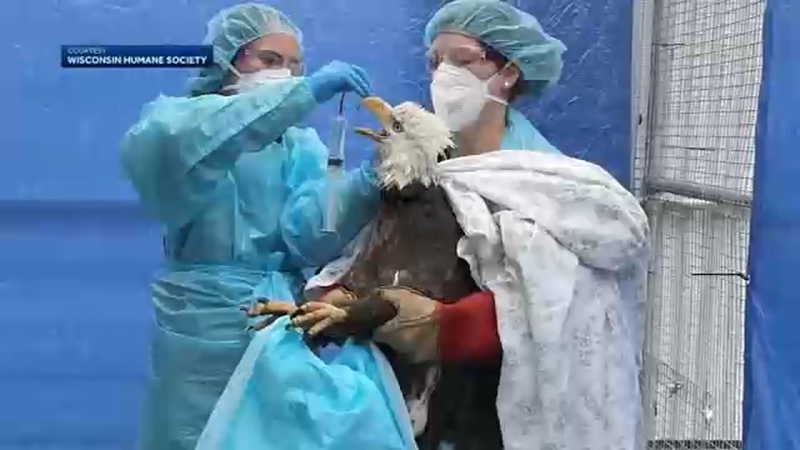 MILWAUKEE, Wis. -- Residents in one Milwaukee neighborhood went from excited to sad, when a pair of bald eagles moved in.

The humane society had to put one of them down after she got sick.

"We saw them focusing on the tree up there and then saw them building the nest," said bird watcher Jan Grimes.

People in Bay View have closely watched for weeks as a pair of bald eagles moved into their neighborhood, but the female recently was found on the ground ill.

Video shows rescuers getting the bird, which was not able to fly.

She was then taken to the Wisconsin Humane Society, where the eagle had to be euthanized.

"It's a majestic bird. It's beautiful and to see it sick, it's just really sad," said fellow bird watcher Amanda Berry.

"Based on the symptoms we saw, we were quite suspect of this bird upon admission. Are we disheartened and sad and heartbroken? Absolutely," said Crystal Sharlow-Schaefer, director at the Wisconsin Humane Society

The disheartened feelings are magnified by the rarity of eagles in Milwaukee.

"This was a really awesome situation ... To have these birds nesting in Milwaukee and we are just devastated that they've been affected by this disease," Sharlow-Schaefer added.

Some Bay View residents shaken by the eagle's death are also now concerned about the health and safety of the many other wild birds along the lakeshore.

"If we're talking about a mass bird die-off, that would be tragic," said Peter Czarkowski, who lives nearby.

For the people who live in the neighborhood, there is now another concern that has them watching the skies.

"We were worried -- could the male have it too? And would he be down," Grimes said. "We don't know what happened to the male, but we haven't seen him for a good week."

The humane society said the male has not been admitted there and they hope it has been spared from the virus.