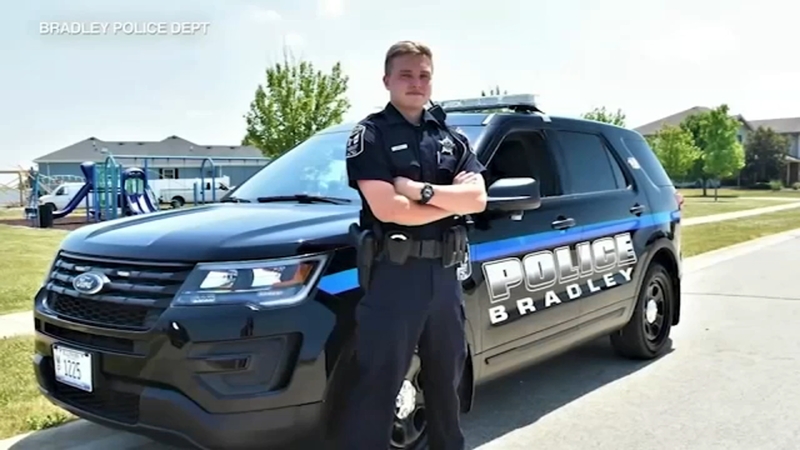 CHICAGO (WLS) -- An Illinois community is coming together to raise funds for Bradley Police Officer Tyler Bailey, 27, who was critically wounded in a hotel shooting that left his partner dead.

He was moved out of ICU Saturday and is now in stable condition, his family said, but the road to recovery continues.

Officer Bailey, and his partner, Sgt. Marlene Rittmanic, were both shot in the line of duty on December 28 as they responded to a noise complaint at a downstate motel.

Rittmanic died of her injuries. Bailey was critically wounded and has been recovering at Advocate Christ Medical Center in Oak Lawn.

"We got to keep our Tyler. They lost their Marlene, so blessings to them. And, I hope Marlene is looking at everyone here and is smiling down," said Kathleen Bailey-Patterson, Bailey's aunt.

Sunday, Bailey's community held a fundraiser to help his family with growing expenses. Organizers said within the first hour they raised more than $45,000.

"I think we all hoped that it would become this, but I don't think we ever expected this, ever," said Lauren Duffield, the fundraiser's co-organizer.

They hosted the event at a Bourbonnais to show support for the officer shot in the line of duty.

While two suspects were eventually arrested, Bailey remained in the intensive care unit, fighting for his life.

Organizers said it's the least they could do for a man who put his life on the line to keep his community protected.

"Tyler hears the prayers. He hears all those prayers, and the prayers are with him," said Lisa Godin, who is also Bailey's aunt.

According to the family, Bailey has shown small improvements each day. Earlier this week, after 23 days in ICU, he was moved from the intensive care unit to standard hospital care.