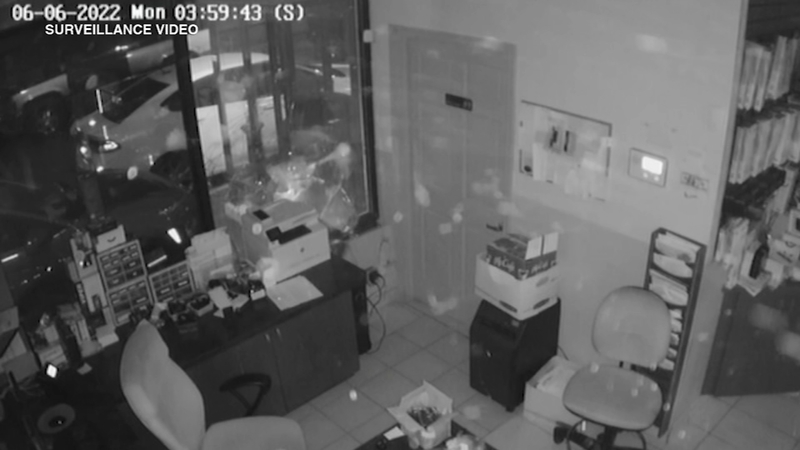 BRIDGEVIEW, Ill. (WLS) -- A few swings of a sledgehammer was all it took for a team of thieves to make entry early Monday morning into a Bridgeview locksmiths' business.

"Everybody's struggling, and these guys are just preying on people that are trying to make their daily lives," said Sam Jaber, owner of Transponder City Locksmith Services.

Jaber is the victim of an increasingly common crime: the theft of auto key programmers, which use special software to essentially make a new key fob for vehicle owners who have lost theirs.

It's hand for a locksmith, but in the hands of a criminal it makes stealing a car a breeze.

"It's a very dangerous tool. You can pretty much make a key for any car," Jaber said.

In the video of Jaber's burglary, one thief climbs through the broken window while the other, still holding the sledgehammer, stands watch. At least one of the men is armed as he searches for the programmers. Soon his partner climbs in to join him.

They find the equipment, a total of eight programmers, in another room, and in less than two minutes after initially making entry, the pair race out of the business. A third offender is waiting in a vehicle to whisk them away.

"They're not amateurs," Jaber said. "They're professionals, the way they're doing it."

The crime is part of a larger pattern that includes the theft of programmers as well as key fobs from car dealerships. In May, two men stole a safe full of keys from a Schaumburg dealership and used a programmer to swipe a red Corvette.

In fact, 24 hours after that break-in in Bridgeview, a sledgehammer was also used by thieves at a Des Plaines car dealership where three luxury vehicles were stolen Tuesday morning.