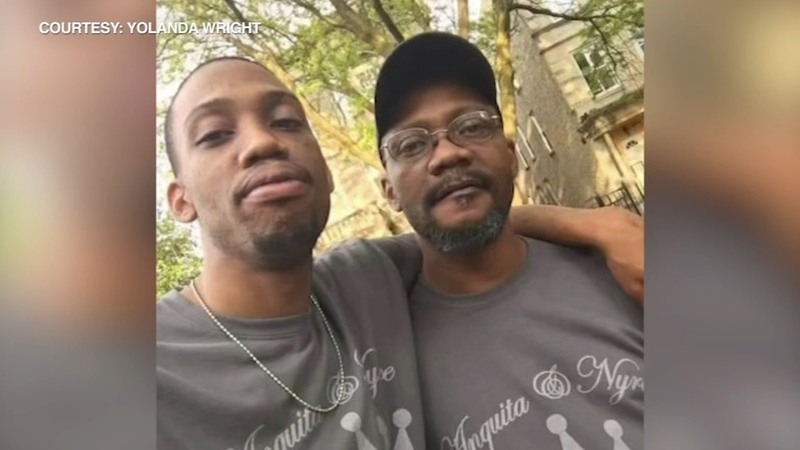 CHICAGO (WLS) -- Chicago building officials are removing unstable parts of a Garfield Park home after a man died and two men were seriously injured when part of the home collapsed onto its front porch Tuesday.

The "cockloft" of the home collapsed suddenly onto the front porch around 4 p.m. Tuesday, crushing the three people who had been sitting in front of the home.

Chicago fire officials said a 32-year-old man and a 68-year-old man were critically injured and taken to Mt. Sinai Hospital for treatment. Relatives said they're expected to recover.

Anthony Wright, 52, was trapped under the rubble and pronounced dead at the scene, fire officials and the Cook County Medical Examiner's Office said.

A firefighter suffered a minor injury while responding to the scene.

"I'm at a loss for words," said Yolanda Wright, victim's sister. "I can't make no sense of this. I can't wrap my head around it, because it's crazy."

Wright's wife said he was on the porch with her 32-year-old son Anthony Jr. and a 68-year-old cousin-in-law.

"This is a hard pill to swallow. I can't... I don't know..." Wright said, distraught. "He was an outstanding dad. I mean, there's nothing that his kids would ask for that he'd hesitate to give it to them."

According to Chicago's Buildings Department, this home has failed two inspections, including one in 2015 that revealed more than half a dozen alleged code violations. One of those violations was for "failing to maintain the exterior walls of the building," with city records noting "washed out mortar."

Relatives said the woman who owns the building is a nurse who worked through the COVID pandemic. They said she kept trying to get financial assistance to fix the building but was never able to secure any funds.

Mayor Lori Lightfoot said Wednesday the city needs to find ways to help homeowners who may have fallen on difficult times maintain their properties and keep them safe.

"As building inspectors have gone through it, they've determined that the supports that are necessary, the bones as the folks in the building trade call it, have just deteriorated to the point of probably not being able to be salvaged."

Wright's wife, who did not want to go on camera, was adamant what happened was a "freak accident," saying her cousin, who is the owner, "did everything she could to keep the building up."

Family members were allowed into the first floor of the apartment to retrieve what they could of Wright's belongings, while the Buildings Department remained on site to secure the structure. The fire department was also called in again late Wednesday morning.

The home's owner could not be reached for comment Wednesday morning.

Statement from the Chicago Buildings Department

The Department of Buildings is working diligently to investigate the partial collapse at 3418 W. Jackson Blvd. and wants to express condolences to those impacted by this horrible tragedy. The City is working to abate the dangerous conditions and will be onsite throughout the evening to remove any unstable portions of the building. As the investigation continues, the buildings department will develop a clearer picture of what occurred and provide updates accordingly.