Chance the Rapper Chicago exhibit at Museum of Contemporary Art, which is free to Illinois residents Tuesdays
WLS
By Samantha Chatman 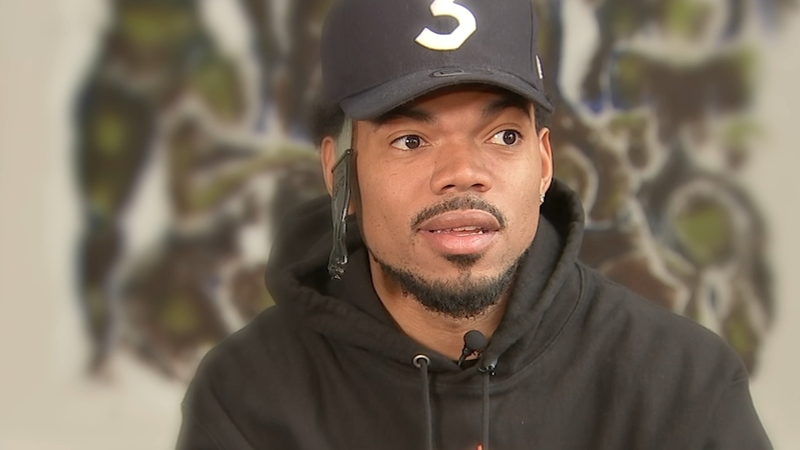 CHICAGO (WLS) -- Back by popular demand: Chicagoans will have another opportunity to see Chance the Rapper's art exhibit at the Museum of Contemporary Art Tuesday.

Chicago native and Grammy award winner Chance The Rapper just released his new single - but he said it's unlike anything he's ever done.

Starting Friday, Chicagoans could experience the new project up close.

ABC7's Samantha Chatman sat down with Chance for an exclusive behind-the-scenes television interview.

Combining art, music and cinematography, Chance the Rapper is surprising Chicagoans, once again, with his new exhibit at the Museum of Contemporary Art.

Expanding his creativity beyond a conventional song, the Chicago rapper has taken his artistry to a new level.

"I had an idea years back to try to do individual works of art, to represent each song instead of doing an album cover," Chance said. "And when I went to Ghana this year, I met this amazing artist, Naila Opiangah."

Opiangah is from Gabon, Africa, but trained in Chicago for several years at the Illinois Institute of technology. The painter and the rapper had a mutual respect for each other's work.

Chance said he knew that she was the person to bring his artistic vision to life.

Opiangah listened to his new song and her creativity started to flow.

"I just felt, mentally and spiritually, I saw something that had to do with ascension and it was only when I got on my flight here that it started revealing itself to me in its visual form," she said.

The two worked on their collaboration for weeks. Chance was busy mastering the writing, vocals and helping to direct the cinematic portion, while Opiangah spent hours using her gifted hands to develop the art.

The final project, "Child of God," is a music video that's available on all streaming platforms.

Opiangah's painting is on display at the Museum of Contemporary Art.

"This is one of the most respected museums in the world," Chance said. "And the fact that people in Chicago will come and see our work, and it be held in such a prestigious space, it's crazy."

The painter said she created images of female Black bodies to counter a narrative of over-sexualization.

"Look at the body for what it is, just a human being," Opiangah said.

"To me, I don't see nudity -- I see children of God," Chance said. "I see a bunch of complex human stories in each figure separate from each other and the reason they're together is their ascension. They're going upwards. That's because they are each a child of God."

Chance revealed to ABC7's Samantha Chatman that it took him a long time to rebuild his confidence and put new music out for his fans.

"It's very, very hard to create, to be vulnerable with your music and to share it with other people," Chance said. "When people hear the song, they're going to feel inspired. What we're really trying to get across is that even though you may fail, we are made in the image of God. We are undefeatable."

You can see Chance and Opiangah's new project at the MCA through Tuesday; and "Child of God" can be viewed on all streaming platforms and chancestuff.com.