At least 50 killed, 300 shot in Chicago so far in January, CPD says 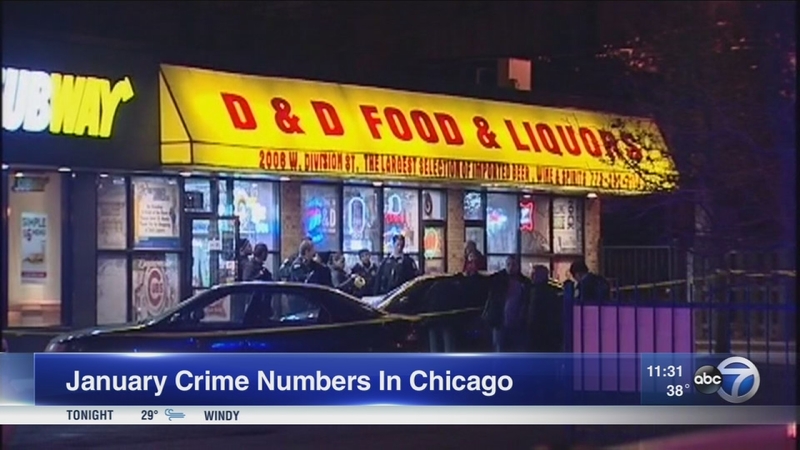 CHICAGO (WLS) -- A liquor store clerk shot on Chicago's North Side was the latest victim in a month where the gun violence has surged as police try to get it under control.

According to the latest reports on crime numbers for January, most of the murders occurred on the South and West sides of the city.

So far in 2017, reports said at least 52 people have been murdered and about 300 people were shot. That's slightly higher than in the same period last year. Guglielmi said Tuesday that 50 people had been murdered so far this year.

The latest shooting happened Monday night at a liquor store in the 2000-block of West Division Street in Chicago's Wicker Park neighborhood.

Police said a man walked into D&D Food & Liquors around 10:25 p.m. and got into an argument with a 26-year-old employee. The fight escalated when the suspect pulled out a gun. The confrontation spilled out into the street.

The employee was shot in the leg and taken to Stroger Hospital, where his condition stabilized. No one is in custody. Area North detectives are investigating.

Community activist Andrew Holmes said parents, preachers and police need to do better when it comes to driving down the violence. He was honored Tuesday by the FBI for his work helping law enforcement fight violent crime throughout the Chicago area.

"Well we still have a lot of work to do. We still have to reach the hearts of those who just don't get it. Let them know they have a life ahead of them. It's not about that gun. They aren't proving a point. It's not a career, to have taken another person's life," Holmes said.

Three police districts on the South and West sides were responsible for about 50 percent of the murders this year, police said.

The CPD and Mayor Rahm Emanuel said they have implemented several anti-violence initiatives this year. One of those initiatives is to hire more officers.