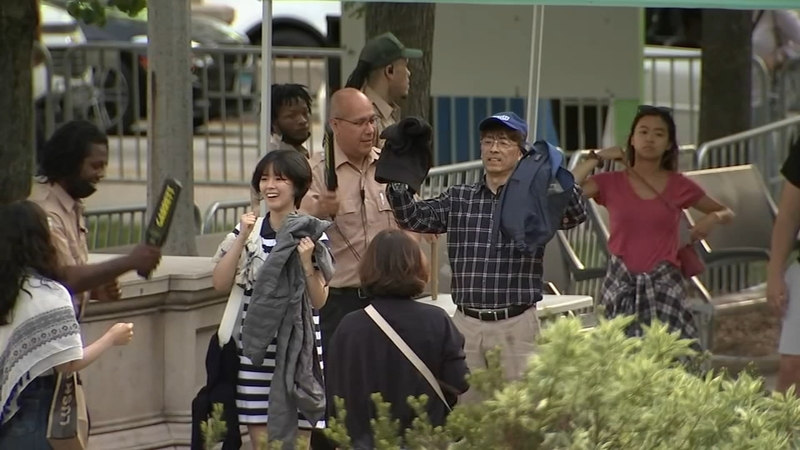 The new rule states visitors under 18 to the park must be accompanied by an adult who is at least 21 after 6 p.m. on Thursday through Sunday nights.

The mayor announced the restrictions after a 16-year-old boy was shot and killed near The Bean last weekend.

In addition, all visitors to the park regardless of age must now be wanded and have their bags checked.

"It wasn't too annoying," said Sarah Jeng, visitor. "I think it was, it was OK, but I think it's worth if it it makes it safer."

The Millennium Park restrictions come in addition to changing the citywide curfew for minors from 11 p.m. to 10 p.m.

There are signs posted with the new rules, and a visible police and security presence to enforce it.

Public opinion is mixed. James Woodard and his son Jaylen see the need for the change, but see a slippery slope in how it's being done.

"I think it's going to lead to some form of profiling in a sense," Woodard said. "So that's where I'm at with it. I think when it comes to the profiling aspect, that's what I'm kind of against."

"I feel like kids don't like to be accompanied by people, but it's still good for them to be able to come out here," said Christian Mahini, Chicagoan. "They don't know how big of a thing it is for them to come out here, they could say no kids allowed or something like that."

"A place like the Bean, which is really famous, and everyone is going around and stuff happening here; it's really unfair," said Shivam Patel, visiting from Naperville.

RELATED: 16-year-old shot and killed at 'Bean' worried about Chicago crime, living past 21

"I'm in Los Angeles, so there's a lot of crime in the past year, so I think it's expected there is going to be crime in a city no matter where you are," said Chase Gardner, visiting from Los Angeles.

Thursday morning, some community leaders came together at Millennium Park to talk about the restrictions. Some who spoke support the mayor, while others don't.

"I am just tired of the criticism because right now we need all hands on deck," Tio Hardiman, Violence Interrupters president, said. "Everybody needs to be a team player in Chicago unless you can come up with a better plan. Nobody has a silver bullet when it comes to reducing gun violence."

"The mayor must be the mayor of the whole city," Eric Russel, Tree of Life Justice president, said. "She cannot just care about tourism and the North Shore. She must care about all of Chicago."

The ACLU has spoken out against the Millennium Park restrictions and the changes to the citywide curfew.

"This is targeted at the very people who don't have places to go in their own community," said Ed Yohnka, director of communications and policy for ACLU Illinois. "This will be applied to people who have always been the subject of police targeting. And that's just the wrong way to go about this."

Chicago curfew for minors goes into effect; ACLU pushes back

This week the mayor also changed Chicago's curfew for minors 12 years of age or older, prohibiting them from remaining in any public place or any establishment within the city between the hours of 10 p.m. and 6 a.m. seven days a week.

The mayor is seeking to make that a longlasting municipal code instead of just an executive order, which City Council will have to sign off on.

"There are challenges that may be brought," ABC7 Legal Analyst Gil Soffer said. "The ACLU in particular has asserted that the ordinance or proposed action may be unconstitutional. Most courts who have weighed in on curfews have concluded that they are constitutional and this is based on a long existing ordinance in Chicago relating to curfew, so I suspect it would withstand any challenge the constitutionality."

The first step to make the mayor's curfew for minors into city code begins Friday. The issue will be before a council committee at City Hall.

"The mayor probably does have that authority on an emergency basis. but if she wants it to be lasting, she probably have to go to the City Council for approval, which is exactly what she appears to be doing," Soffer added.

Some of the council's members are undecided, while others have chosen whether to support or oppose the mayor's move.

"It's an easy vote for me because that's an economic engine for us, Downtown and that area, people are afraid to go down there, so hopefully those people feel a little safer," said Alderman Nicholas Sposato.

"I think it ostracizes our children. It tells them that it's not okay for them to come downtown. Downtown is not a space for you. We should be more inclusive and engaging with our youth," said Alderman Roderick Sawyer.

In order to provide safe places and activities for teens, Mayor Lightfoot has encouraged young people to download the My Chi, My Future app. It will connect them to jobs, out of school programs and other resources.

City leaders said they want to make this a "summer of opportunity" for teens.