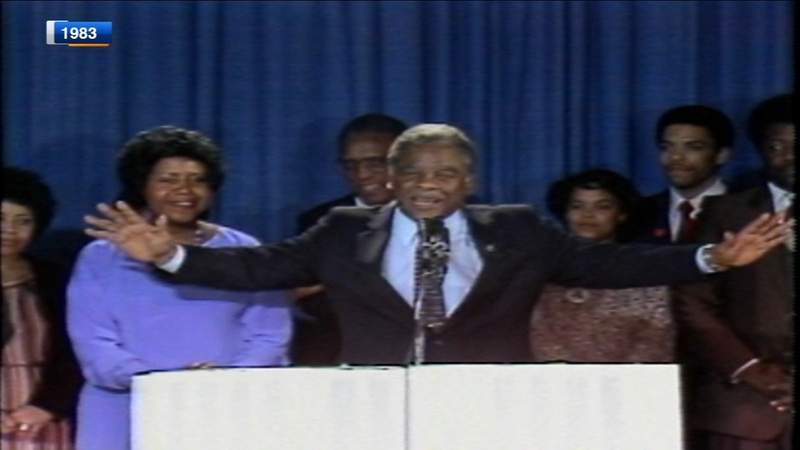 CHICAGO (WLS) -- A pair of African American public servants historically advanced to the mayoral runoff, defeating a machine and a candidate named Daley in the process, while evoking memories of Harold Washington's wins in the 1980s.

Former federal prosecutor and police board head Lori Lightfoot surged to an early lead and never gave it up. In the process she and the rest of the 14-person field demolished old political calculations

He's been around Chicago politics since the 1960s and says the history made yesterday, as borne out by ward vote totals, shows something has changed.

"Lightfoot's secret was that she captured that one very large voting block of independent progressives along the Lakefront," he said.

And in a large crowd of candidates she benefited by being the voters second choice in almost all the wards.

Rose said the corruption allegations against aldermen Ed Burke and Danny Solis contributed to Toni Preckwinkle's second place finish, but her arrival in the runoff shows her resilience - and Lightfoot's surge reminds him of how Washington's mayoral wins in the 1980s re-arranged Chicago politics.

At the Woodson branch of the Chicago Public Library there is a soaring Jacob's ladder sculpture that was commissioned as the centerpiece of an archive of African American history and literature. Conservatives see much in the history made last night. George Pearson, a conservative political consultant who self identifies as member one of Black Tea Patriots said last night's outcome "warms the heart no different than when President Obama (was) finally getting to that next step," he said in an interview under the sculpture.

"Yes we can achieve whatever we set our minds to... we are well prepared to," he said.
Pearson added that from his side of the political divide, the results signal historic change - especially when it comes to reforming the Chicago's property tax structure.

"It shouldn't be just about race or creed or religion or sexual orientation it should be about the community, the entire community of the City of Chicago," he said.

And perhaps no community more than Chicago's LGBTQ members celebrated as intensely with Tuesday's outcome - the advent of a pair of African American women now vying for Chicago's top spot.

It brought a smile to the face of Rick Garcia. He started Equality Illinois a generation ago, seeking simple non-discrimination laws to protect the LGBTQ community.

"All of the hard work, of many people over decades, came to fruition because both of these candidates," he said. "One is lesbian and one has a strong record on LGBTQ rights. We haven't seen that in a long time. There's always somebody there who isn't just with the community."