Mother describes trying to save son, 7, from Clearing fire that killed grandmother

Brayden Findlay was released from the hospital Monday, still recovering from smoke inhalation and third-degree burns
WLS
By Terrell Brown 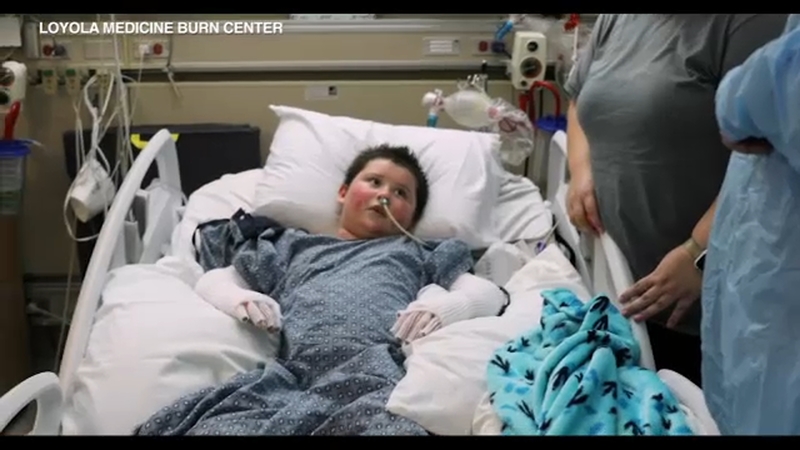 Mother risks life to save son, 7, from fire that killed grandmother

CHICAGO (WLS) -- A 7-year-old Chicago boy is out of the hospital after he was badly burned in a house fire in Clearing last month.

His grandmother was killed and his mom almost died trying to save him.

Brayden Findlay is recovering from smoke inhalation and third-degree burns to his arms and hands.

When his mother, Melissa Compean, made it out of the house fire, there was no sign of her son and no way back in because of the flames. So she went to Findlay's bedroom window.

"When I got to the window, I heard him screaming," she recalled.

She broke the window and yelled inside.

"I said, 'Come on Brayden, we have to go. Come to the window,'" she said, but didn't hear a response. "My heart dropped, so I jumped in through the window."

She was determined to find him, but the smoke was almost too much.

"I was taking deep breaths of this smoke. It was the most painful thing. The worst taste, it hurt it burned," she said.

Compean picked up a blanket, put it over her face and kept searching for her son, feeling around in the blinding smoke.

"I felt his arm and it was wet from being burned," Compean described. "He was passed out. When I grabbed his arm, it hurt him, so he started screaming. I said, 'Oh thank God you're alive."

"My stepfather had his arm through the window waiting for us to come out so he could pull Brayden out. I kinda met both of their hands together. Tapping his hand, grab his hand. So he grabbed his arm and I did the rest pushing him out," she added.

A neighbor also ran to help the family escape after his dog woke him up.

"The people who saved this kid's life are his mother, despite having to breathe all that smoke, risk and some harm to herself," said Dr. Joshua Carson with Loyola University Medical Center.

Findlay is now at a rehabilitation facility. Therapists will work to rebuild the muscles in his arms and hands.