Karol J. Chwiesiuk said he was traveling to DC 'to save the nation,' feds say
WLS
By Chuck Goudie and Barb Markoff, Christine Tressel and Ross Weidner 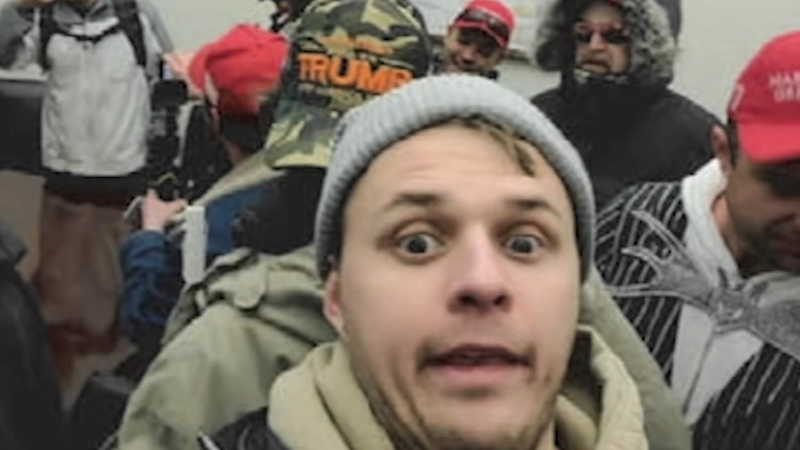 CHICAGO (WLS) -- A Chicago police officer has been charged in connection with the attack on the U.S. Capitol, according to a federal complaint.

Federal agents said Officer Karol Chwiesiuk stormed the Capitol with thousands of others on January 6, 2021. The 11th District officer was named in a federal criminal complaint and the subject of biting comments from the mayor and police superintendent. The 29-year-old officer has been removed from duty.

"The fact that a Chicago police officer has been charged in that attack on American democracy, makes my blood boil. Makes me sick to my stomach," said Chicago Police Department Supt. David Brown.

Chwiesiuk was sporting a Chicago police logo on his sweatshirt during the violent insurrection. He was hired as a city police officer in 2018 after a stint with the Cook County Sheriff's Department.

Authorities said photos in the complaint show Chwiesiuk inside the Capitol, even inside a senator's office, and that text messages reveal he used racial slurs.

Witness Robert Berliant said he saw two people in FBI vests arrest the officer outside what appears to be his home on Chicago's Northwest Side.

"Obviously, it's extraordinarily disturbing that a Chicago police officer would be part of an insurrection, that overtook the American capitol for the first time since 1814, over 100 people injured, five killed ...including two police officers," said U.S. Rep. Mike Quigley.

Investigators said they have geo-tracking evidence to prove Chwiesiuk left Chicago on January 4th, was in DC by the 5th and returned home on the 8th.

City officials say he was on medical leave from CPD at the time, but that there is no excuse for what the Harrison District officer is accused of doing.

"We will not tolerate this. We will not stand for it. You will not be paid by the taxpayers of this city, to be a hateful member of our community," said Mayor Lori Lightfoot.

Mayor Lightfoot and CPD Supt. Brown spoke on the officer charged in the Jan. 6 attack Friday.

Chwiesiuk has been stripped of his police powers. Brown said it was a mistake to have hired him in the first place during a big police recruiting drive in 2018.

Chwiesiuk was arrested Friday morning at the home on Chicago's Northwest Side where he lives with his parents. Robert Berliant said he witnessed two people in FBI vests make the arrest.

"They put them up against the one of the vehicles, and I think they patted him down looking for... whatever. And, then I'm pretty sure they handcuffed him because I saw his hands behind his back," Berliant said. "The whole thing sickens me and I, the fact that so many of these are going to get away with it really upsets me."