Officer Karol Chwiesiuk said he was traveling to DC 'to save the nation,' feds say
WLS
By Chuck Goudie and Barb Markoff, Christine Tressel and Ross Weidner 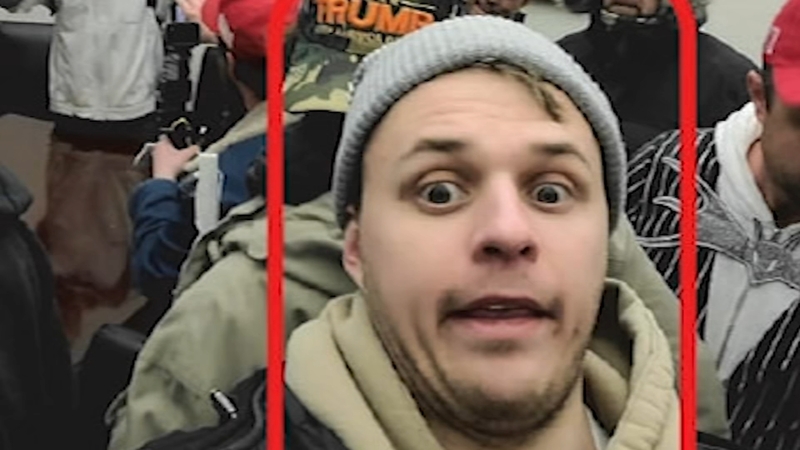 Federal agents say Karol Chwiesiuk went to Washington on Jan. 6, 2021, vowing to "save the nation."

Now, nearly 16 months later, his attorneys are working to save him from a criminal conviction. While Chwiesiuk is expecting an offer from the government to plead guilty, his attorney said he maintains his innocence and looks forward to trial.

Pictures in federal court records highlight a Chicago police sweatshirt that prosecutors say then 29-year-old Chwiesiuk wore to the insurrection in Washington.

The Harrison District officer was arrested last summer and charged with several misdemeanors, prompting his boss, Supt. David Brown, to say it makes his "blood boil" and sick to his stomach.

Chwiesiuk has been stripped of his police powers and is currently on a leave of absence, according to a department spokesperson.

Federal officials in Washington Thursday said "a plea offer will be forthcoming" to Chwiesiuk.

"A Chicago police officer is going to want to avoid any conviction, whether it's a felony or a misdemeanor, but it still doesn't have a lot of room to operate here unless the government is willing to pass on the charges entirely," ABC7 legal analyst Gil Soffer said. "He has all the incentive in the world to strike a plea for a misdemeanor and not take a risk on something more serious."

Soffer, a former federal prosecutor, told the I-Team that the government and Chwiesiuk have incentives to avoid an actual trial.

"Going to trial and being convicted is worse than taking a plea for a police officer," Soffer told the I-Team. "He's going to have the exposure that comes with a trial however long it takes, he's going to look at a more serious penalty in all likelihood from a judge who won't be pleased that he forced a case where the government's evidence is strong to trial. So there's a lot of reasons why he ought to be taking a plea instead of taking it to trial."
Report a correction or typo
Related topics:
chicagoeast garfield parkus capitolu.s. & worldi teamchicago police department
Copyright © 2022 WLS-TV. All Rights Reserved.
I-TEAM
How to protect yourself from moving company scams
Oak Park families' bank accounts drained by mysterious withdrawals
CPD cancels all days off to handle possible Memorial Day violence
New car buyers faced with sticker shock, long waits, no guarantees
TOP STORIES
Mayor Lightfoot to address downtown violence, Millennium Park curfew
Boy, 14, killed in north suburban shooting, police say
10 killed in Buffalo supermarket attack police call hate crime
33 shot, 5 fatally, in weekend violence, Chicago police say
Calls for cooling ordinance grow after 3 found dead in Rogers Park
Evanston HS reinstates indoor mask mandate
Lunar eclipse during Super Flower Blood Moon appears in Chicago sky
Show More
Police release names of victims killed in mass shooting at supermarket
Arby's manager urinated in milkshakes for sexual gratification: police
2 killed, 2 hospitalized after rollover crash on I-290, ISP says
1 killed, 5 hurt in California church shooting, authorities say
'American Idol' contestant from Illinois makes it to Top 5
More TOP STORIES News