The image has been widely shared on social media and circulated by students.
WLS
By Leah Hope 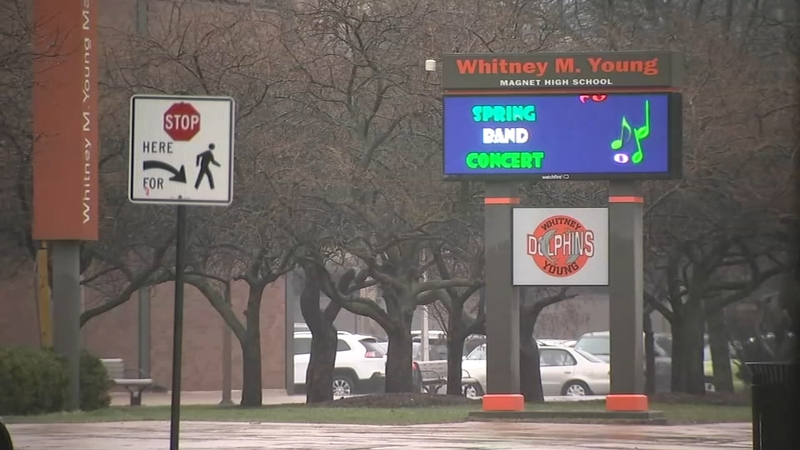 CHICAGO (WLS) -- A white teacher has been pulled from Whitney Young Magnet High School Thursday after he hung a Black doll by its neck from a cord at the front of his classroom.

The school day ended with a special listening session after an apparent racial incident at one of Chicago Public Schools' stand-out high schools.

"He definitely should have thought about it because that could be really sensitive, especially being an African American doll. And even something like that, like suicidal, could trigger suicidal thoughts," said Whitney Young sophomore William Schetz.

"It really surprised me and I was really disgusted because our school is supposed to be very inclusive and diverse," said a student of color who preferred to speak anonymously.

These reactions come after a Whitney Young Magnet High School teacher hung a Black doll by the neck in a classroom.

The image have been widely shared on social media and circulated by students.

Principal Joyce Kenner said Chicago Public Schools officials have taken over the investigation of the incident and removed the history teacher from the school as the latest scandal to roil one of the district's selective enrollment high schools plays out. Kenner declined further comment Wednesday, the Chicago Sun-Times reported.

A letter from the school's principal to parents said, "...a teacher hung a small stuffed African American football doll by a pull-down string from a projector screen in their classroom. The teacher indicated he found the doll in his room and wanted the students to see if someone would claim it."

When another teacher confronted that teacher about the hanging doll, the two got into a fight.

Whitney Young's principal went on to say in the letter to parents, "We plan to follow the disciplinary protocol established by Chicago Public Schools."

Sources told ABC7 that the teacher who hung the doll is white and teaches history.

"I believe he should be removed from the school. His teaching degree should be taken away," said Whitney Young parent Michelle Donegan.

Donegan is a parent of a bi-racial student at the school and said she wants aggressive action taken against the teacher who hung the Black doll.

"He knows what lynching is. He knows what hanging the doll would represent, but did he give any thought to how it would affect the students," she added.

The spokeswoman for the Chicago Teachers Union commented on the situation saying: "...practices that mitigate the harm of racial biases must be ongoing and consistent in our schools."

CPS initially would not comment on the status of the teacher involved with the doll incident, saying they do not comment on personnel matters, but later issued a statement that said: "Chicago Public Schools (CPS) strives to foster safe and secure learning environments for our students, families, and colleagues. Our schools and the District investigate and address all complaints and allegations of wrongdoing in accordance with District policies and procedures."

A petition calling for the teacher's removal said he had long been a problematic presence at the school. It had over 400 signatures by Wednesday evening. He could not be reached for comment, according to the Sun-Times.