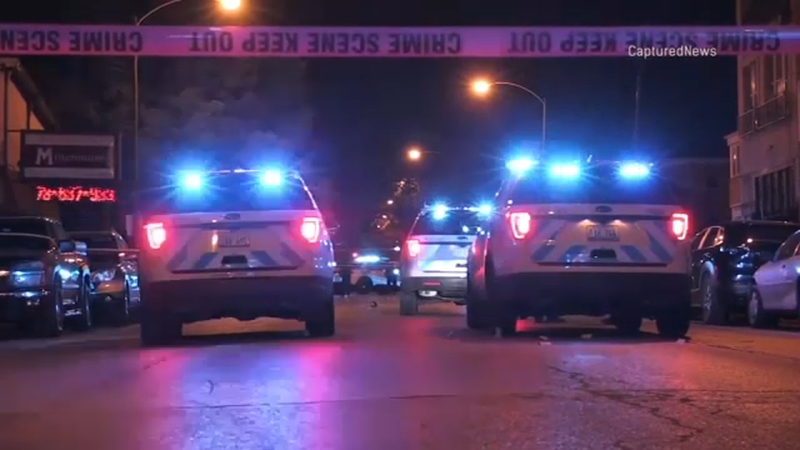 CHICAGO (WLS) -- At least five people have been killed and 24 others wounded in shootings across Chicago so far this weekend, including a 2-year-old girl who was shot in Little Village on the Southwest side.

Crime tape and swat teams line the street, after a morning gun battle in the River North neighborhood.

Investigators said a group of men got into a fight around 10 a.m. inside of parking garage.

The garage is attached to a luxury high rise near Dearborn and Grand.

Police said someone started shooting, and others fired back, wounding at least three people.

A car that was seen being towed away from the scene was riddled with bullet holes.

"I heard several shots go off," said one man who was nearby.

Just since Friday night, more than two dozen people have been shot and at least five people killed.

One of those shootings happened in the city's Belmont Cragin neighborhood overnight Friday.

Police said a man with a gunshot wound in his back was spotted running down the street with a rifle. He was taken into police custody and another man was found dead nearby.

On the city's South Side, a large party ended with gunfire.

Two people killed, three others wounded at that party in Gresham.

"I do not think that all of the shootings in Chicago were totally gang-related. Some of them are cliques and beefs, and a lot of retaliation going on," said Pastor Corey Brooks.

Pastor Brooks said the violence also ended up on his street Saturday.

"There is a lot of violence at this time," he said.

A 21-year-old was also shot and killed Saturday afternoon in the 1300 block of East Marquette Road.

Brooks was at his church when he heard about the shooting.

He said he is working with community groups and outreach to stop the violence, before it starts.

"We are trying to identify the shooters or those that have the chance of being shot. We make relationships with them," he said.

A 2-year-old girl was injured in the back seat of a car being driven by a male about 6:55 p.m. Friday in the 2800 block of West 26th Street when another vehicle drove up alongside them and someone inside that vehicle started shooting, Chicago police said.