'A little alarming': Woman, 72, injured in Lakeview shooting while walking on sidewalk, CPD 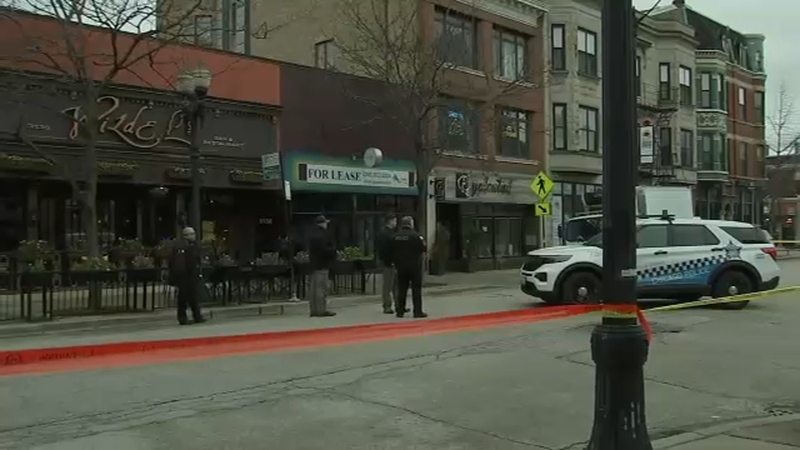 CHICAGO (WLS) -- Two-toned police tape blocked off a busy neighborhood block on Chicago's North Side Thursday after a 72-year-old woman was shot while walking down the sidewalk.

"It is really horrifying. Just really creepy," said Grace Brasey, who works nearby. "I live really close by as well and just the concept of being shot at 2 p.m. is a little alarming."

Somewhere along the stretch of sidewalk outside quaint cafes and shops in the 3100-block of North Broadway in the city's Lakeview neighborhood, Chicago police said someone shot the suburban woman who was on an afternoon walk with her family.

"We heard the shot, it was loud," said witness Trisha Kurtz.

The unmistakable pop of gunfire sent Kurtz running from the back of a neighboring bike shop.

"I came out and saw her lying there," she said. "I went down and, at the time, I didn't know it was her niece cinching her leg with a hoodie."

Trained in first aid, Kurtz stepped in to help.

While the woman who'd been shot needed medical attention, she said her family members began to panic.

If the bullet struck just a few inches over, Kurtz said, the little boy in the stroller may have been hit.

"They were walking in this direction and I assumed she was in front of the stroller. It hit her upper left thigh. Kind of more glad it hit her because it looked like when she was on the ground the stroller was right behind her," Kurtz said.

The woman sustained a gunshot wound to the upper thigh and was transported to Illinois Masonic Hospital in good condition.

Employees at Johnny Sprockets Bike Shop think the bullet came from the north and whizzed right past their front window.

"The position from where she was standing or would have been standing -- there was really no other path the bullet could have traveled except for straight through here," said Eugene Bruber, an employee at Johnny Sprockets.

The second Lakeview shooting in the span of a few days happened directly in front of the neighborhood's Chamber of Commerce.

"It's just so close to what happened with the employee from Sunday night," said Maureen Martino, executive director of the Lakeview East Chamber of Commerce.

Investigators are still trying to track down the person who murdered Hermilo Beltran, a father of two children, as he showed up for work at the Happy Camper restaurant on North Clark St. late Sunday night.

Police reported no arrests in either shooting.

"South and West Side has been putting up with this for way too long. The North Side needs to step up and they need to be vocal. We all need to come as a city together and stop this," Martino said.

"Tragically, in the past week, the 44th Ward has experienced two shootings. On Sunday night, Hermilo Beltran, was killed behind 3458 N Clark. This afternoon, in the 3100 block of N Broadway, a 72-year-old woman was shot in the leg by unknown offenders driving by in a car. Police do not believe she was the intended target. Fortunately, she is in stable condition and is expected to recover.

I was driving on Briar near Broadway returning to my office minutes after today's shooting and was on scene shortly after the victim was placed in the ambulance. I saw the anguish and anger I felt reflected in the faces of witnesses and others in the vicinity. The police presence after the incident was swift and significant. I am confident that with assistance of witnesses and video from nearby security cameras, the CPD will work diligently to solve these two shootings.

While shootings in the 44th Ward are rare, violence has been brought to our neighborhoods too often in the last few years. As I have stated numerous times both publicly and privately to the leadership of the Chicago Police Department, this is unacceptable. As it has been for several years, crime remains my number one priority. I have repeatedly called for more police presence in Lakeview and I find it unacceptable that our 19th Police District staffing numbers are so low.

During the past few months my office has held public safety meetings with all the Lakeview chambers of commerce and several community groups. I will continue to fight for funding to the Police Department, enhanced technology resources, as well as mental health and housing programs. Going forward I will continue collaborate closely with the hardworking 19th District Police and I will provide updates to the community as they are made available to my office.

Residents who have any information on these shootings should reach out to the Bureau of Detectives - Area 3 at (312) 744-8263. Anonymous tips can be sent to www.cpdtip.com.