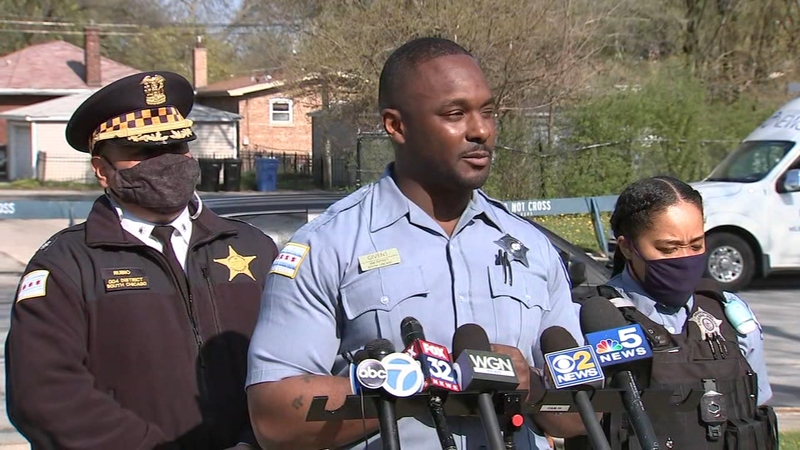 CHICAGO (WLS) -- Two Chicago police officers are being credited with saving a young boy's life after he was shot in a drive-by on the South Side Monday.

Barely two years in a Chicago police uniform and the pair of young officers knew exactly what to do.

"A lady waved us down and said there was someone shot in her backyard across the street. We saw a young man waving his hands saying he was shot," said Officer Julius Givens.

It took only a glance to see the bleeding victim near 82nd and S. Cole was only a boy who was just 13-years-old, and that there were no seconds to spare.

A drive-by shooting in the South Chicago neighborhood Monday night has left two cousins, ages 13 and 14, in critical condition.

"Officer Ward wasted no time. I told her to grab his legs, that we were going to have to transport him ourselves," Officer Givens recalled. "We have to go about 100-200 feet carrying this kid back to our squad car."

From there, a police escort led their squad car speeding through South Side streets with their lights and sirens blaring. Officer Rhonda Ward was behind the wheel, racing to get to Comer Children's Hospital.

"I was in the back with the young man," Officer Givens said. "He was in and out of consciousness, so we were trying to keep him alive and keep him up."

The drive-by shooting left two cousins, ages 13 and 14, critically wounded, according to police.

"He trusted us and we wanted him to," Officer Ward added. "We got there right on time for him. That was the main goal."

Within seconds of pulling up, doctors greeted the officers and raced 13-year-old Swaysee Rankin into surgery.

His mother only heard of how he got there after the fact.

"Those officers were quick. Did not wait [and] got him on time," Rankin's mother, Ashley Jackson said. "I am so thankful."

The mother of a 13-year-old boy wounded ina drive-by shooting thanks Chicago police officers who transported the boy to the hospital Monday night.

Rankin was shot in the back and abdomen, according to police.

His 14-year-old cousin Randle Archie was shot in the stomach and transported to the University of Chicago Medical Center in critical condition.

Officers Givens and Ward's fast action may well have saved that teenager's life.

"It was just heartwarming for me that I could actually save a life because that's what I got on this job to do," Officer Ward said.