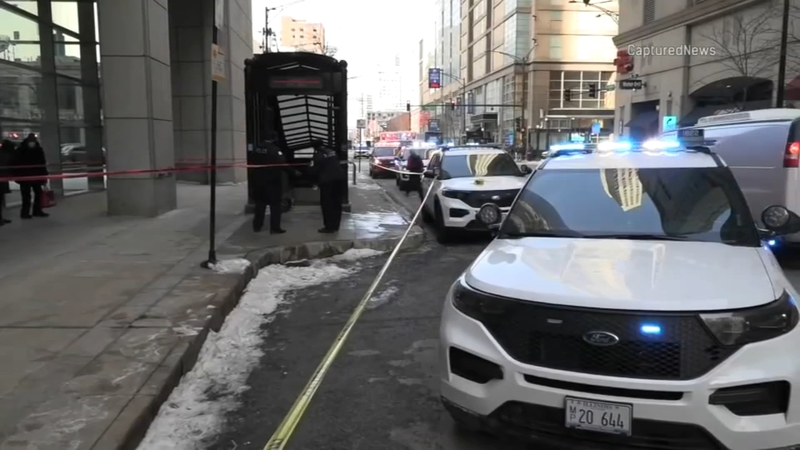 CHICAGO (WLS) -- Shots were fired outside a busy River North Red Line stop for the second time in several hours Monday morning, and trains were bypassing the station.

Shots were fired about 9 a.m. outside the State Street and Grand Avenue station, and Chicago police and Chicago firefighters responded to the scene.

No one was hit in the incident.

Chicago police said a 30-year-old man was exiting the train platform in the 500-block of North State Street when a verbal altercation turned physical.

An unknown individual hit the victim on the forehead with a gun. Two rounds were fired, CPD said.

The man was taken to Northwestern Memorial Hospital and remained stable. No one was in custody later Monday morning, and Area Three detectives are investigating.

Eight hours earlier, Vadarrion Knight, 16, was leaving the same station and was shot twice in the chest and knee. He died at the scene.

Knight's death was the first murder in this Near North side area this year according to Chicago Police Department data.

The department also reports there had been four shootings in the area this year, as of Saturday.

The intersection is typically busy with people walking to hotels, stores and restaurants had detours and disruptions this morning as police investigated.

An area resident named Linda, who declined to provide her last name, said she's lived in the area of 15 years but has noticed more problems in recent years.

"It is very disturbing," Linda said. "It is just disturbing. I feel very bad for the neighborhood. I hope we can find a way to do something about it. It's really scary."

Heeren Abuja was in the area on business Monday and has visited this area before.

"It it happened at 10 a.m., what's to stop it from happening right now, right?" she wondered.

"It's adding to the fear I know I have for a fact," Jason Rogers said.

Jason Rogers, a lifelong Chicagoan, works in the area and shared he is considering a move.

"I don't know where the problem is coming from or what the mentality is, what the change is, but something has got to be done," Rogers said. "Whatever they are doing in the city and the state it's not working and it needs to change."