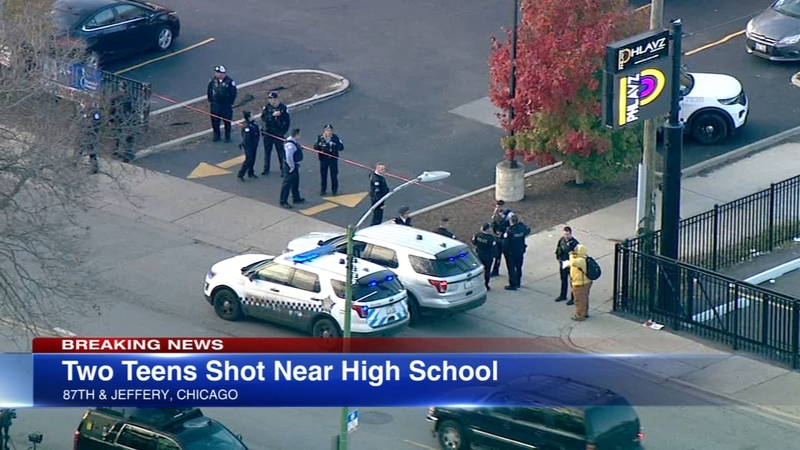 Police said shortly before 4 p.m. in the 2000-block of East 87th Street, two teens were near the sidewalk when they were struck by gunfire.

A 16-year-old girl was and a 19-year-old man were both struck in the thigh. They were taken to University of Chicago Hospital in good condition police said.

The shooting took place just blocks away from a Chicago Vocational High School, but it was not clear if the teens had any connection to the school.

Nearby surveillance video reviewed exclusively by ABC7 appears to show the shooting in real time.

The footage shows a group of seven people standing outside of the Liberty Income Tax storefront at 87th and Jeffery; it's unclear if they were all there together as some of the people seen are farther away from the storefront than others.

One person in the group appears to look around the corner of the storefront, down the alley in the direction of 86th street. At that point, two more people in the video walk up the alley and approach the group.


Only about 10 seconds go by before multiple loud bangs ring out in two bursts, seconds apart. As this unfolds on the surveillance video, one of the two people in the alley clearly holds his or her arms up, hands together, in what looks like a firing position.

Everyone seen in the video scatters as the two people in the alley run back toward 86th street; one of them briefly reaches down to the ground as if to pick something up.

Amid the commotion, someone else can be seen on the parking lot pavement next to a car, crawling away from the storefront.

The business owner who showed this video to ABC7 did not want the business identified but did say police also reviewed the footage; Chicago police would not confirm if detectives have seen this video when reached by ABC7.