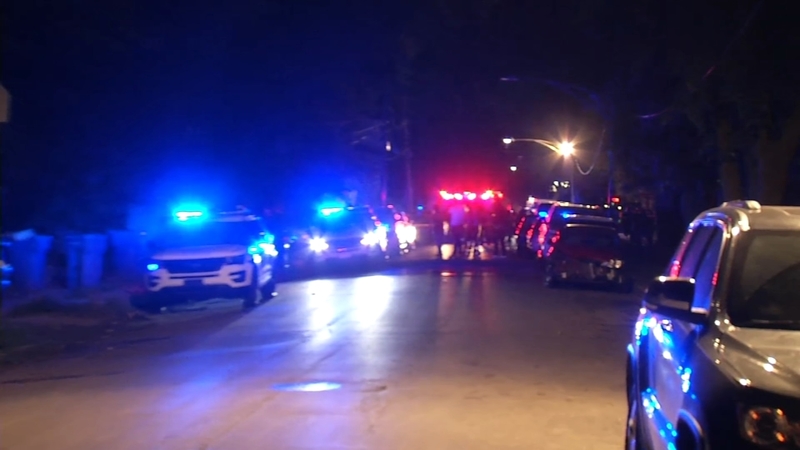 CHICAGO (WLS) -- President Donald Trump compared Chicago to a "war zone" Monday during a law enforcement round table at the White House after more than 60 people were shot, 11 fatally, over the weekend.

"I've been assessing and reassessing everything the Chicago Police Department has done," said Brown. "Just imagine starting a new job and having to figure out historical violent crime in about 10 weeks."

Chicago Police Supt. David Brown spoke Monday morning after more than 60 people were shot in Chicago over the weekend.

Mayor Lightfoot said she thinks there has been some progress, but that reducing gun violence in the city is going to take some time.

Early Tuesday morning, a rideshare driver was heading to a residence around 12:16 a.m. in the 3600-block of North Whipple Street when the back windshield of his car was shattered by a bullet, police said. The driver was not hurt.

Police said three people died from gun violence in Chicago on Monday. The most recent fatal shooting killed a 21-year-old man in Gresham on the South Side.

Officers responded to a call of a person shot around 10:42 p.m. and found him laying on the ground in the 8000 block of South Stewart Avenue, Chicago police said. He was shot in the back and head.

The man was pronounced dead on the scene, police said. The Cook County medical examiner's office hasn't released details about his death.

Monday morning, a 27-year-old man was shot dead Park Manor on the South Side.

He was on the street about 1:45 a.m. in the 6700 block of South Rhodes Avenue when someone fired shots from a vehicle, police said.

Shamari K. Smith was struck in the head and pronounced dead at the University of Chicago Medical Center, police and the Cook County medical examiner's office said. He lived in Park Manor.

Just over an hour prior, a 26-year-old man was shot dead in Lawndale on the West Side.

He was standing on the sidewalk about 12:24 a.m. in the 1500 block of South Homan Avenue when he was gunned down, police said. He was found unresponsive and pronounced dead at Mount Sinai Hospital.

The Cook County medical examiner's office identified him as Marshawn Thomas. He lived in Lawndale.

In non-fatal shootings, two people were wounded when they were shot in Englewood on the South Side.

The man was struck in the body and was taken to the University of Chicago Medical Center, police said. The woman was hit in the thigh and was taken to St. Bernard Hospital in fair condition.

A person was wounded in a shooting in Morgan Park on the Far South Side.

He took himself to Roseland Hospital in an unknown condition and was then transferred to Christ Medical Center in Oak Lawn, police said.

Minutes prior, a 26-year-old man was wounded when he was shot in Austin on the West Side.

He was walking on the sidewalk about 8:25 p.m. in the 800 block of North Parkside Avenue when a white SUV approached him, police said. A backseat passenger in the wearing a surgical mask in the SUV fired shots.

The man was shot in the arm and was taken to West Suburban Medical Center in good condition, police said.

A 17-year-old boy was wounded in a shooting in Lawndale on the West Side.

He was on the sidewalk about 5:48 p.m. on South Keeler Avenue when someone opened fire, Chicago police said.

The teen was struck in the shoulder and taken to Mount Sinai Hospital in good condition, police said.

About an hour prior, two women were wounded when they were shot in Altgeld Gardens on the Far South Side.

A 41-year-old woman was struck in the leg and taken to Roseland Hospital in good condition, police said. The other woman, 31, was grazed in the abdomen and declined medical treatment.

A 22-year-old man was wounded when he was shot in Grand Crossing on the South Side.

He was traveling in a vehicle about 3 p.m. in the 7900 block of South South Chicago Avenue when a someone driving alongside him fired shots, police said.

The man was struck in his hands, and he took himself to Jackson Park Hospital in good condition, police said.

A man was shot in Englewood on the South Side.

He was standing at a gas station about 11:36 a.m. in the 7100 block of South Vincennes Avenue when someone opened fire, police said.

The 22-year-old was struck in the foot and treated on the scene, police said.

The days first shooting wounded a man who was seated at L & G Family restaurant in South Shore.

A gunman walked inside and complained about a feud he had with the man before shooting him, according to police.

The 43-year-old man, shot in his upper arm and chest, was taken in good condition to the University of Chicago Medical Center, police said.

Both Supt. Brown and Mayor Lighftoot said change will not happen overnight.

"Police alone is not, and cannot, be the only solution for the gun violence faced by so many throughout Chicago," Brown said.

"I think that the efforts we are doing both on the short term interventions, also on the longer term strategy is starting to see we're starting to see some difference," Mayor Lightfoot said.