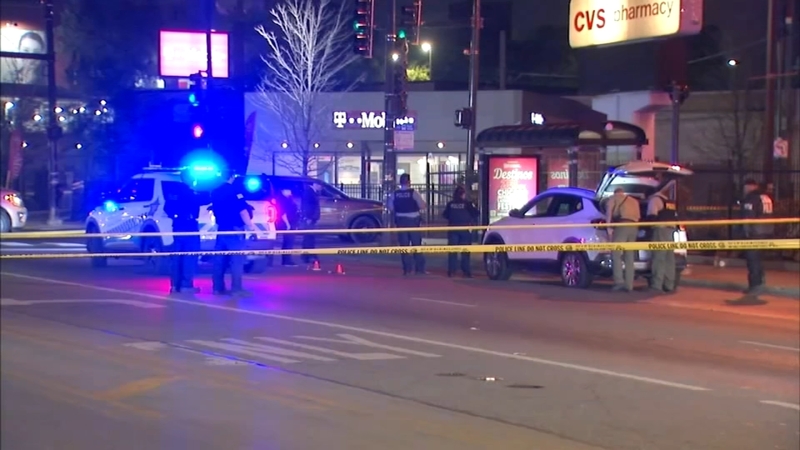 2 killed in back-to-back shootings on NW Side

CHICAGO (WLS) -- Two men were killed in back to back shootings on Chicago's Northwest Side early Thursday morning. A man taken into custody after being shot by police in Kenosha may be connected to the homicides.

Police said just after 1 a.m. 25-year-old man was sitting at a bus shelter at Fullerton Avenue and Pulaski Road in Logan Square when he was approached by a man wearing all black. They argued and the 25-year-old was fatally shot in the chest.

"I heard a noise; then I saw a guy with a hat and gray backpack. He shot the guy two times," said the owner of the gas station across the street, who witnessed the shooting. "He asked like three or four cars, but no one would give him a ride, and then he ran to West Fullerton."

CPD said the suspect then fled on foot to the 2300-block of North Keystone Avenue in Hermosa, where he took a 41-year-old man's vehicle. The two struggled, and the 41-year-old man was also fatally shot in the chest.

The 41-year-old was identified as Miguel Padilla, Jr. Friends said he had just parked and was headed to his neighborhood bar, where he was like family, when he was shot.

"It's a tragedy that this happened to him, he was a loving, caring person who went out of his way for everyone," said Lourdes Rivera, close friend of the victim.

The suspect drove away in the car, which police described as a 2016 brown Buick Encore.

Kenosha police Thursday afternoon said they were alerted that a suspect in a Chicago homicide had traveled into their area. The Kenosha County sheriff said that suspect was stopped by his officers, then shot K9 Officer Riggs before being shot by an officer.

"In a lot of ways he's a hero today because he at least initially took the suspect down," Kenosha Sheriff David Beth said of Riggs. "Who knows if he would've tried carjacking someone at gunpoint."

The suspect was taken into custody and is being treated at a local hospital.

Kenosha officials did not clarify if the suspect was wanted for this double shooting or a different homicide, but did say the suspect was driving a car stolen from his victim.

"I have people who have grown up in Chicago their entire lives telling me 'I'm scared to get out of my car at night,' so we need to come together as a community," he said.

Padilla's family said he will be remembered as a sweet person who never let a lifelong disability affect him.

"He had cerebral palsy," Rivera said. "He didn't have feeling in one hand, but it didn't stop him from life. He kept going."
A bullet-riddled car could also be seen on the scene where the 25-year-old was fatally shot in Logan Square, but it was from an unrelated incident, police said.

There was a shootout heading inbound on the Kennedy Expressway, from Addison Street to Fullerton, about 1:30 a.m., according to Illinois State Police.

A male and female in a white hatchback pulled up when they saw police and said they were shot on the expressway, police said.

One person suffered non-life threatening injuries in the incident.

No one was in custody in connection with any of the incidents later Thursday morning.