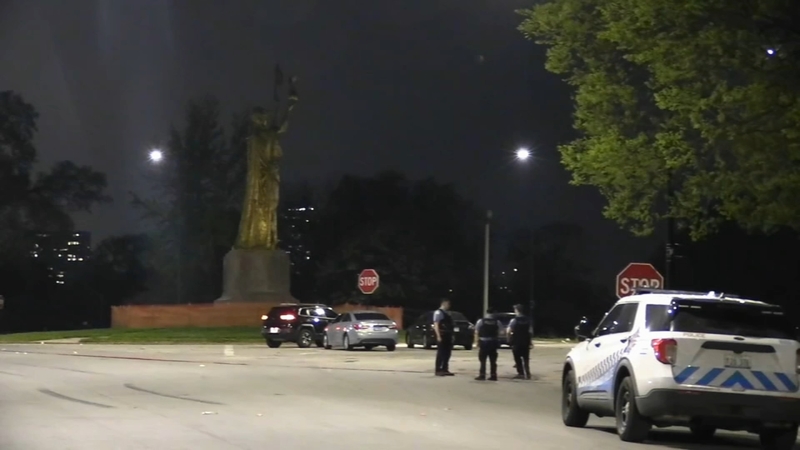 Witnesses reported hearing multiple gunshots before CPD said six people were shot in a very crowded Jackson Park, near where the Obama Presidential Center will be.

The shooting happened just after 10:30 p.m. in the 6400-block of South Richards Drive. Witnesses told police two people in an SUV just started shooting into the crowd.

WATCH: CPD Supt. gives update on Jackson Park, Back of the Yards shootings

Four women in their 20s and 30s were hit, and two of them are in serious condition.

They were taken to Jackson Park Hospital, University of Chicago Medical Center and Holy Cross Hospital.

A fight broke out outside U of C hospital at one point, as some of the crowd gathered there.

Another witness said there were people everywhere, gathered at the bridge near the golf course, blocking the roadway, and he couldn't leave.

He decided to walk, and made it just in time.

Still in disbelief, Jin Phillipe came back to Jackson Park to get his car Wednesday morning.

He noticed his SUV was hit by a bullet on the passenger side, and there was blood smeared on the front.

"Right when I passed this statue; that's when the shooting started," Phillipe said. "Thank God -- I wasn't here to get hurt."

Chicago Police Superintendent David Brown said during a press conference Wednesday morning that the shooting stemmed from an argument between two groups in the park. An Indiana rapper was live streaming a video in the park, when another group also started a live stream, which led to an argument and gunfire.

"We know that the police-only effort likely fails, but has a short-term win, but requires a lot of police resources," Brown said. "We talk about what's been working this year, it's been this whole-of-government approach, and it's a similar approach that we did for COVID."

Street Pastor Donovan Price said it's another sign of what Chicago will face as the weather turns warm.

"It just unfortunately was what we thought it would be on a hot day. It was an out-of-control scene of violence," Price said.

About an hour later, in the 6500-block of Promontory Drive, about a mile away, two other people were shot.

A 27-year-old man and 30-year-old woman were both hit near La Rabida Children's Hospital after a male suspect fired several shots at them.

Chicago police said no one is in custody while they continue their investigation.

"I should be able to enjoy where I live, my neighborhood; it's scary as well," resident Jennifer Matthews said.