Around 1,500 additional technicians came to help with repairs

ComEd said 57 customers remain without power as of Sunday evening. Most of its customers in Harvey, which was particularly hard-hit, have had their power restored but it's not fully online as expected, the company said.

At one point, more than 800,000 customers lost power due to the storm, ComEd said.

BJ Wyatt sat outside of a south suburban hotel where she has been staying since her power went out Monday night.

"The tree that came down took out our wires so the outage was resolved, but we still did not have power," Wyatt said.

The major outage lead to more health concerns for Wyatt.

"I have COPD, number one, and I cannot breathe without the air conditioning," he said.

The high temperatures and no air conditioning forcing her to rely heavily on her inhaler.

"After the electric was off and the AC was off, the temperature was rising and I started to have difficulty breathing- I knew that would be the case but we waiting thinking the electric would come back on. But, by Tuesday afternoon, I had to get out of there."

Wyatt is one of an estimated 35,000 people still without power late Friday afternoon after derecho slammed northern Illinois on Monday.

"This is not just about wires and poles," said Rich Negrin, spokesperson for ComEd. "With a storm this bad, with this much damage, it's not just a repair job. In some of the areas that are impacted, it's actually a rebuild. We're going to rebuild areas of the grid that have been significantly damaged by the storm. And that rebuild is not just a repair, it's going to take some time."

The vast majority of outages were restored by Friday, though Negrin said some in the hardest-hit areas may not have power until 3 p.m. Saturday. Around 1,500 technicians came from around the country to help with the repairs.

There are 10,000 residents in the city of Harvey, and when the storm ripped through Monday afternoon, ComEd said 9,200 of them were left without power. Friday morning, ComEd said 5,100 customers in Harvey were still without power heading into the weekend.

"This week has been a living hell," said South Holland resident LaVonne Starks. Like many, she's been in the dark and without air conditioning since Monday.

"I have multiple sclerosis. And I'm getting sicker being in the heat," she said.

Down the street, Robert Bray has a generator. But he's only using it to run his refrigerator and keep a fan breeze coming.

"It's a small generator and you don't want to take a chance of blowing something up," he said.

They are among thousands of south suburban residents now going on four days without electricity after violent storms battered the Chicago area.

"It's probably a once-in-a-lifetime storm I hope, because we haven't seen anything like this before," said Melissa Washington, senior vice president at ComEd.

Washington said there's significant damage in the western territory as well. But with a higher concentration of residents in Harvey, South Holland and nearby suburbs, more customers south of Chicago are still in the dark.

"You may not see them on your block, but when you see them, they're working to restore your power," Washington added.

One resident pointed out how the COVID-19 pandemic is exacerbating the situation. In normal times, you could go to a movie or restaurant to cool off. But this summer, many of those indoor options are not available.

Harvey is still in shambles several days after the storms. Several transformers that line the streets were knocked down, and are still being cleaned up.

Security cameras captured the moment when one fell, spewing bright sparks before the video cuts out as not just the one house but all of the community lost power, including its emergency services departments.

"We barely got time to get inside the house, it started wind-gushing," said Violeta Fuentes, resident. "Very strong winds blowing towards the house. It was scary."

"It started pouring down and the wind just started howling," resident Tyron Powell said. "And about a couple minutes after that, all the lights and power went out. It's been out since then."

"There was not one road on Monday night in the city of Harvey that was passable," said Mayor Christopher Clarke. "As of Wednesday morning, 94% of the city was still without power. That's when it became a major concern."

Powell said he's not surprised by the ongoing power outage once he saw the extent of damage, with trees and power lines down, an area barn's roof torn off and garages collapsed. But he said he feels luckier than others with a place to store his perishable food.

"You can imagine that people that don't have a place to store their food, that they got to try to either cook it up or let it go bad," he said.

Cook County Emergency Management started to hand out food to residents Thursday afternoon and continued through the weekend.

"We anticipate handing out food until we have none left," said William Barnes, executive director.

Residents in need of food can visit the drive-thru supply line from Noon- 6:00 p.m. at the Bryant Elementary School located at 14730 Main Street, Harvey, IL.

"It's like a horror movie. That's how I feel, like we're living in a horror movie," said Ernisha Harris, South Holland resident. "We gotta go to different towns to get gas. Ain't nothing open."

The spoiling food and lack of air conditioning are big concerns for the mostly low-income community. Next door to the downed transformer is Jesse Jackson Jr. Senior Housing. Residents sat outside; the air there is cooler than in.

Dark stop lights are backing up traffic, and lines lay dangling over downed branches, providing no power just another hazard.

A woman identifying herself as Melinda worried about her 91-year-old mother and other residents.

"The halls are dark," she said. "The units, the apartment units are very hot. It's an act of God, but at the same time, you know, I think, had the building had a backup generator that would have alleviated, a lot of problems."

"With the block being so dark at night, you're scared to come home from work," said Jasper Madison, South Holland resident. "You can't see if somebody is sitting in the yard, just waiting on you."

Mayor Clarke is calling for help from all quarters, particularly in the form of food and cleanup crews to supplement their own, and was clearly frustrated by all the bureaucracy involved in the process.

"If I'm drowning in a lake, I shouldn't have to articulate to you, well, if you can send me a life buoy, a life vest, I'd really appreciate it. That's not how it works," he said. "When we see our people in trouble, our government is supposed to respond. I shouldn't have to play the political question in order to get a response." 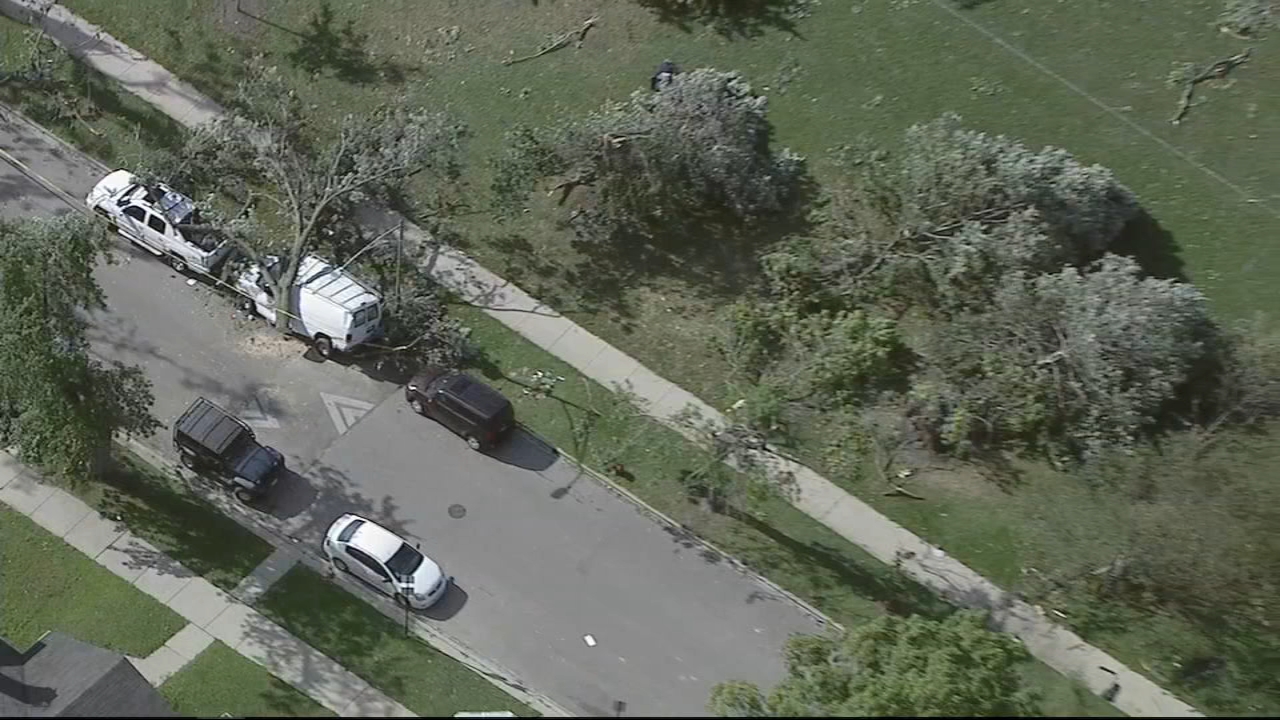 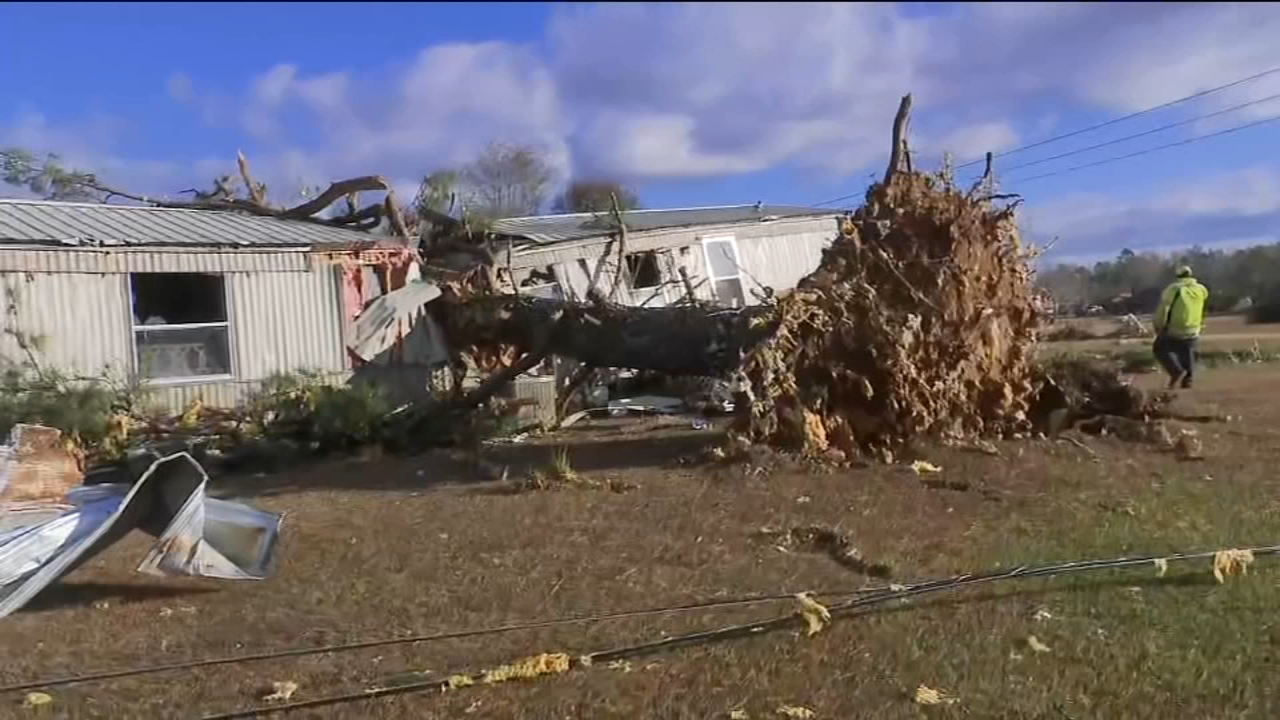