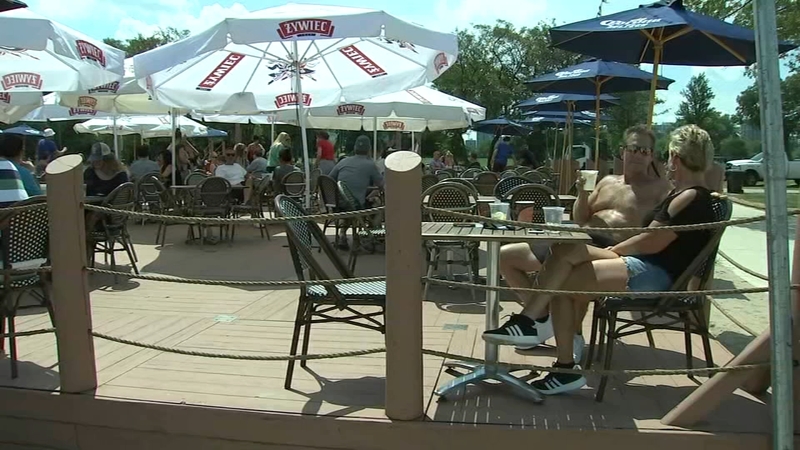 CHICAGO (WLS) -- On the first full weekend of reopening of Castaways Bar and Grill, the lakefront restaurant at North Avenue Beach could end up closing before it really gets a chance to open.

"It's been tough. It's been really, really hard on all restaurants on the beach," Castaways General Manager Juana Valdivia said.

Valdivia worries her eatery may not survive, if Mayor Lori Lightfoot makes good on her threat to shut down beach concessions a second time, after catching dozens of partygoers ignoring city rules and social distancing at Montrose Avenue Beach.

"There has been no one at North Avenue Beach, and I understand they're all down there but we shouldn't be at fault for them," Valdivia said.

Sunday, while vehicle traffic was limited to those with boat slip passes, workers installed fencing to deter large crowds from gathering in an area referred to as "The Peninsula."

The new restrictions come after hundreds reportedly attended a Saturday party, which the mayor crashed.

"I politely said please open our beaches, Lori," attendee Mick Montesi said. "And she looks at me and said, 'This is a pandemic.'"

A picture of the party shows the mayor and Montesi. He said he's the guy with his back to the camera.

Lightfoot threatened to shut the lakefront down again after the encounter.

It's called a pandemic, people. This reckless behavior on Montrose Beach is what will cause us to shut down the parks and lakefront. Don't make us take steps backwards. pic.twitter.com/FHxeYfH7Wf

The Chicagoan said gatherings happen there almost every weekend.

There were no problems Sunday, but some beachgoers aren't happy with the new rules.

And while, the Montrose Beach restrictions will remain in place indefinitely, so does the concern about another beach concessions shutdown.

"We've been waiting since May to open up," Valdivia said. "It's going to be really hard because we are not making it."

Large crowds were seen packed all along the lakefront Saturday afternoon. An ABC7 viewer shared an image of another large group of people, not social distancing and many without face masks.

Chicago police turned multiple cars away from getting into Montrose Beach Saturday as officers told would-be beach- and park-goers it was closed. Crowds were also dispersed at the lakefront near Belmont after police started to clear the area.

Chicago health officials said last week, social gatherings were the top cause driving up COVID-19 case numbers in the city.

The mayor followed up in a second social media post that she will be addressing the issue. Several squad cars were seen patrolling the lakefront Saturday evening.

In case you were wondering, I stopped by to see for myself. It’s being addressed.