Alvaro Larrama, a bouncer at the pub, is charged in the 23-year-old's death
WLS
By Eric Horng and ABC7 Chicago Digital Team 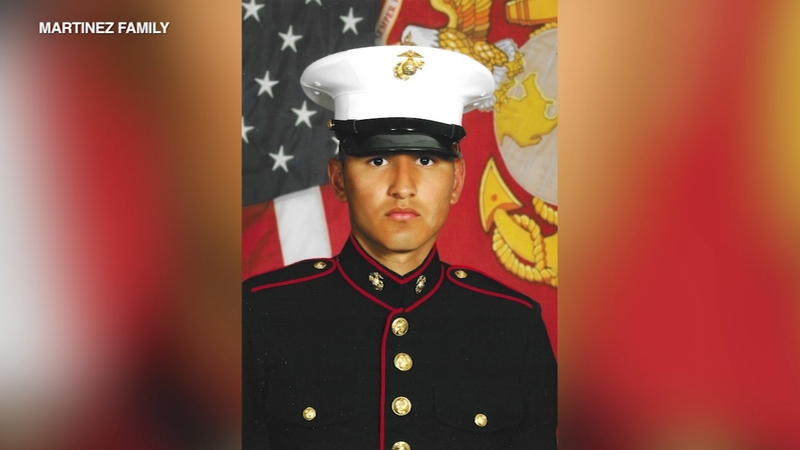 CHICAGO (WLS) -- The body of 23-year-old Daniel Martinez, the U.S. Marine from Palos Hills that was stabbed to death in Boston last week, returned to the Chicago area Thursday.

For most of the afternoon Thursday, friends and family members, as well as others who didn't even know the Marine sergeant, gathered out in the rain as his body arrived home.

His body arrived at Chicago's O'Hare Airport around 2 p.m., according to family, and was then taken to the family's funeral home on West 63rd Street.

Many at the airport were inconsolable. Martinez's mother wailed and nearly collapsed when his body arrived, held up by loved ones. Their loss is immeasurable; Martinez's future seemed limitless after serving honorably in the Marines for four years.

His body arrived at Chicago's O'Hare airport around 2 p.m., according to family, and was then taken to the family's funeral home on West 63rd Street.

"My son had dreams of going to college but... they're not going to materialize now," said his father Manuel Martinez, holding back tears.

"He was just there for everybody who needed him, and he was always there for me as my best friend," said Maxwell Stevens, friend.

Martinez's body was taken from the airport to the family's funeral home, which he had worked with his father to remodel. His wake will be held there next week.

Many who came knew Martinez well, but others knew only of his service.

"Just wanted to show support for what he did for our country, for our neighborhood," said Southwest Side resident Jim Curtin. "And just when he got done serving our country, to have something so senseless and just violent happen is not good."

Martinez was fatally stabbed by a bouncer at a bar in Boston on Saturday. Alvaro Larrama, 38, is charged with murder in his death. He appeared in court Monday and was ordered held without bail.

"He was such a beautiful person inside and out, and I know he was just there for everybody who needed him, and he was always there for me as my best friend," said Maxwell Stevens.

Apolonia Martinez said her son was enjoying life, traveling and catching up with friends, at the time of his death.

Prosecutors said surveillance video shows Martinez trying to enter the Sons of Boston pub near the city's famous Faneuil Hall with a friend Saturday night. When he was denied entrance by the bouncer, they exchanged words and then Martinez walked away, prosecutors said.

"I finally let my guard down a little bit now that he was back, and it was a sigh of relief for me," his mother said. "I'm like, OK, he's home. My boy is home. Now I can just exhale, and then for this to happen, it doesn't make sense."

According to court documents, prosecutors said that after Larrama stabbed Martinez, he went back into the bar's kitchen where video shows he washed his hands, discarded his sweatshirt and knit cap, and turned his t-shirt inside out before fleeing the scene from a back door.

Martinez was born and raised in Chicago's Little Village neighborhood, went to high school in Northwest Indiana where his mother is, lived in Palos Hills with his father and was helping out with the family business, working at his family's funeral home in Chicago.