The south suburban community has had 4 water main breaks in just the last few days, according to the village president
WLS
By Leah Hope and ABC7 Chicago Digital Team 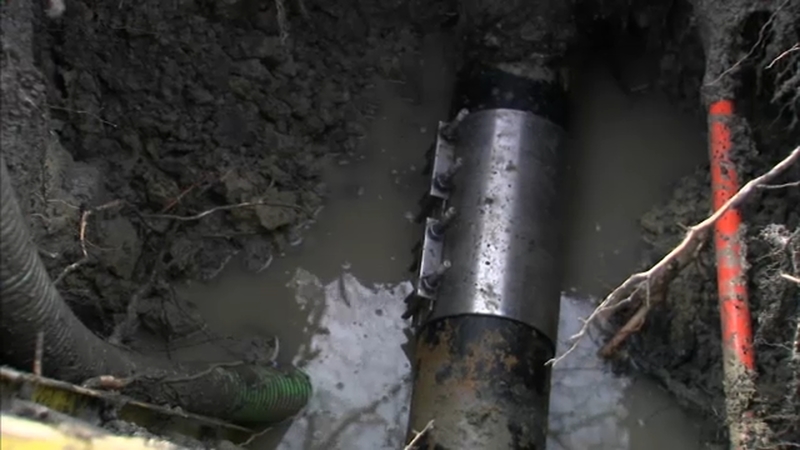 DIXMOOR, Ill. (WLS) -- The residents of south suburban Dixmoor will remain under a boil order until Tuesday after the second water main break in less than six months.

The main break on Spaulding Street resulted in low water pressure and a boil order in most of Dixmoor, according to Village President Fitzgerald Roberts.

While the leak has been fixed and water pressure has resumed, for now, there have been several disruptions in service in the last few days, resulting in another boil water order.

"This break [Sunday] was pretty rough, so there was a call for a boil order," Roberts said Monday. "In the last few days, we have had four water main breaks... the infrastructure is bad and we need help."

Roberts said he applying for federal grants and looking for help from the county and state after a series of water problems.

"I'm just praying they will come in and help us get this issue under control because it's an issue that's existed for years but it has gotten worse," he said. "We deserve water -- also safe water."

Water had to initially be shut off to the village on Sunday, but officials were working on a solution to get at least low water pressure to residents while the break was being repaired, Roberts said.

The worst was last fall when the village's 3,900 residents had no water for weeks.

"This is America. This is Cook County. We aren't someplace that doesn't have resources and we don't have to minimal we need to survive," said Dizmoor resident Malissa Keith.

Keith cares for her kids and father, and said she had to take them to a hotel last night.

"What am I supposed to do. That is a necessity for him to be clean and I couldn't do it," she added.

Keith isn't the only resident frustrated with the ongoing issues.

"I have no water at all. No water. You know how that makes me feel? It makes me feel like I paid taxes and voted for these politicians for nothing," said Dixmoor resident Pamela Dixon. "We are, basically, living every six months with no water on out here," Dixon added.

Around 7 a.m. Sunday, an 8-inch ruptured pipe underground forced residents to, once again, lose water or have low water pressure.

As of about 11:30 a.m. Monday, village officials said the break had been repaired and water pressure had returned, however, out of an abundance of caution, the boil order will remain in effect until 6 p.m. Tuesday, as Public Works conducts additional testing.

"We are asking residents to boil water for the next 24 hours as pressure builds in our water system," Roberts said. "I appreciate the patience of residents as we worked to get this situation resolved and I thank our public works department for their hard work in fixing the water break so that we could return water pressure to the Village."

The village's water supply issues last year stemmed from old infrastructure that has been creating issues with the Harvey water supply, which is fed to Dixmoor.

"The issue is old infrastructure. Our pipes are over 100-years-old," Roberts said.

A state of emergency was declared back then, with many having to pick up water bottles to make it through the week.

"Ain't no telling when the next one's going to occur," Roberts added.

Roberts is calling on state and federal help, and said he believes it will take $15 million to $20 million to fix Dixmoor's water supply issues. He added that someone from the governor's office and county officials have already reached out to him about fixing the issue.

Cook County Board President Toni Preckwinkle has been a key advocate in Dixmoor's push to resolve its water supply issues.

In December, Preckwinkle said there are still long-term issues with Dixmoor's infrastructure that could damper the town's water. She said the county plans to fix that by using some federal funds through the American Rescue Plan.