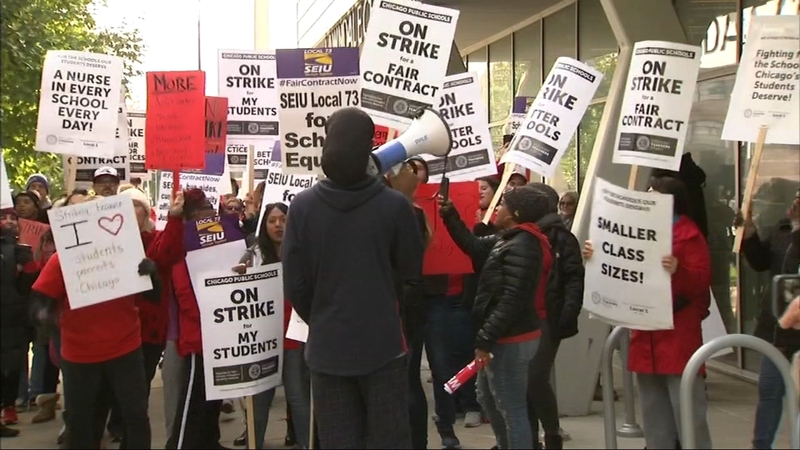 Twenty-six thousand CPS teachers and 8,000 support staff workers including custodians, special education assistants and bus aides are officially on strike. It is the first CPS teacher strike since 2012.

Mayor Lori Lightfoot said CPS classes have been canceled until the teachers give word that they've agreed to a contract and the strike is over. That means there will be no school for students Friday, at the least.

The school district also canceled all weekend sports activities and a college fair.

All athletic team competitions and practices including CPS SCORE! and the highly selective college fair scheduled this weekend are also canceled. https://t.co/xBYhkKPEff

"Until we get notification from the CTU that they're intending to come back to the classroom, school is canceled for the duration," Lightfoot said.

Negotiations are being held daily at Malcom X College, a neutral location agreed upon by both sides. They signaled significant progress on the issue of class sizes Thursday.

"For the first time since this process began a year ago I can say we have a proposal, in writing, from CPS that addresses class size. It's a positive step," Sharkey said.

Class size and increased support staffing, including nurses, counselors and librarians, remain the key issues preventing the city and teachers from striking a deal.

Chicago teahers are on strike, and Thursday they picketed their home schools and then gathered downtown for a rally and march on the first day of the work stoppage.

Mayor Lightfoot said reaching a deal will require some urgency on the part of CTU.

But the union cautioned a settlement is not imminent; despite reaching an agreement on class sizes, the issue of support staffing remains unresolved.

"I think we have time to get something meaningful done, you know, we're at the first step, I think it's highly unlikely that we'll have a deal on all of the outstanding items by the end of today," said Sharkey.

The union has about 15 issues that still need to be resolved, while the Board of Education is looking to address nine.

Rev. Jesse Jackson made an appearance at Malcom X College Thursday evening in hopes of pushing things along

"We must move from battle ground to common ground. That's what we really want to do because each side has some validity," he said.

Thursday Lightfoot visited a YMCA center which is offering programming for kids affected by the strike, and also visited with children in Lawndale.

Mayor Lori Lightfoot visits with dozens of CPS students who are now enrolled in child care programs at the local YMCA during the teachers strike. Negotiations will continue today. The mayors team says she will not be in those meetings. @ABC7Chicago pic.twitter.com/cqa1ItIL3k

The city has offered teachers a 16-percent raises over five years. The union is asking for a 15-percent raise over three years, but this is about more than pay. The CTU wants more social workers, nurses and librarians and reduced class sizes. Mayor Lightfoot said her team has proposed changes that would satisfy teachers' demands.

But if the union is expecting resources to mean more money for teachers, a change from that 16-percent raise offer, that's not going to happen, Lightfoot said.

"We are not moving any further on money, because we can't," she said.

Teachers have also asked for more prep time, but Mayor Lightfoot said she refuses to cut class time for children.

After picketing at their home schools, thousands of striking teachers and their supporters rallied and marched in downtown Chicago.

On the first day of the work stoppage teachers followed their school picketing with a rally at CPS Headquarters in the Loop and then a march through the streets of downtown Chicago, onto City Hal, targeting the mayor, through the financial district and finally to Grant Park.

"It's not about the money, it's for our kids," said Alene Echevarria, CPS counselor. "It's not okay that they have one counselor for 936 kids. It's physically impossible to get it all done."

The message they hope the mayor hears is that this strike is not about the money, but about more resources for every school.

The union has said that members want to make this a short strike, but they intend to be walking the picket lines until they say the city comes with a solution to make conditions better.

"Obviously, I would rather be inside the building, that would be my preference, but I am here because we are fighting for class size, resources, clinicians and just justice and equity for our students," said teacher Jinny Gerhardt.

"I think that we can come to some sort of agreement obviously we're in negotiations. I wish that it would go faster so we can go inside and support our students because my question is, where are they right now? " said teacher Destiny Hooper.

Earlier, at Peirce Elementary School in the Edgewater neighborhood, teachers on the picket line said no kindergarten class there has less than 30 students in it.

"It translates to the kids are not nearly getting enough time with the teacher," said teacher Michael Cortright. "I mean every day, it's a struggle to make sure that every student is getting what they deserve."

Teachers said they need a nurse for every school and social workers who can help children deal with trauma. They believe it's not too much to ask for.

As the 2019 Chicago teachers strike has demonstrated, social justice issues may become standard in labor negotiations.

In the history of labor unions, contract fights were originally over pay and work hours. Over time, health benefits were added to the collective bargaining mix. And now, as the CTU has demonstrated, social justice issues may become standard in labor negotiations.

The teachers who walked off the job Thursday did so over concerns that are far beyond traditional collective bargaining issues. While salary and benefits are important, the union said social justice issues are too.

"Teachers have, for the past two years, organized, marched, demonstrated and walked out of classrooms on behalf of putting more resources into schools to address equity issues," said Bob Bruno, labor professor at the University of Illinois.

Those issues include addressing poverty, homelessness and affordable housing. The Chicago Teachers Union was one of the first public sector unions to push for social justice issues in a contract years ago. With a new equity-minded mayor and more state education funding, the CTU saw an opening with this contract to fight for things like smaller class sizes, more nurses and more social workers.

"I do believe it has spread as a new way of thinking about bargaining in the public sector," Bruno said.

While labor experts expect these issues to become standard in the collective bargaining process, can Mayor Lightfoot afford to put the issues in a teacher's contract?