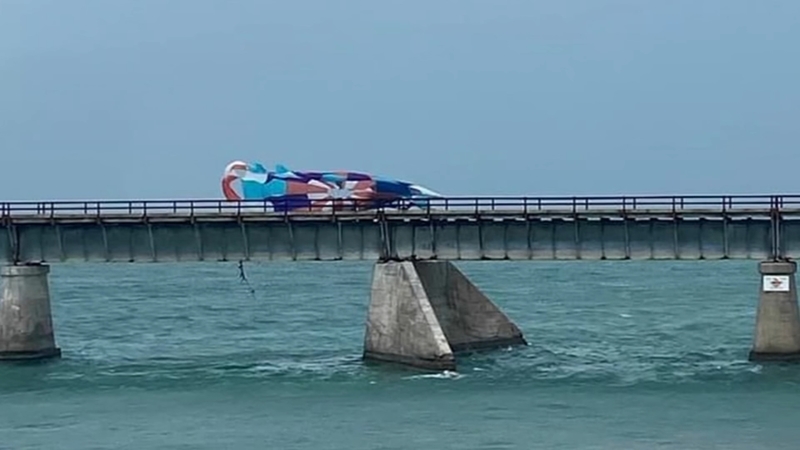 CHICAGO (WLS) -- A mother from Elk Grove Village was killed and two children were injured in a parasailing accident in the Florida Keys on Memorial Day.

The incident happened near Pigeon Key. The Florida Fish and Wildlife Conservation Commission said while the woman and two children were parasailing, winds picked up, causing the parasail to strike the Old Seven Mile Bridge.

"He told his customers those parasailers are not in a good place, that's not looking good," said Kasey Platt, wife of the good Samaritan who came to their aid. "No sooner did the line snap."

Platt's husband was on a charter fishing boat, and raced toward the bridge.

"What he said was he really felt as though that was going to be their saving grace, because otherwise there was no way to stop them," Platt explained. "They were still attached to the parachute below, so they were harnessed into it. He had to saw the harnesses free from the bridge."

Investigators said just after the mother and two young boys launched, the wind "pegged" the parachute, meaning the captains could no longer control it.

In their report, investigators said, "with the parasail peg the captain cut the line tethered to the three victims the three victims dropped from an unknown height and drag through the water by the inflated parasail."

The woman, was identified as Supraja Alaparthi, was killed.

"I think she probably braced the children and took the impact, so they are still here today," Platt said.
Both children were injured. A 7-year-old boy was taken in critical condition to Miami for hospital treatment. A 10-year-old boy suffered minor injuries, officials said.

The 10-year-old boy was identified by officials as Alaparthi's son. Officials said the 7-year-old is her nephew.

The Alaparthis had just moved from Schaumburg, where their nephew still lived, to Elk Grove Village. Back home their family friends are gutted and confused.

"They left school one day early to go to Florida and I haven't heard about them since," said Anvit Tiwari, friend of injured child.

An investigation by the FWC and the United States Coast Guard is ongoing. An official report on the incident does state the severe weather was a factor.