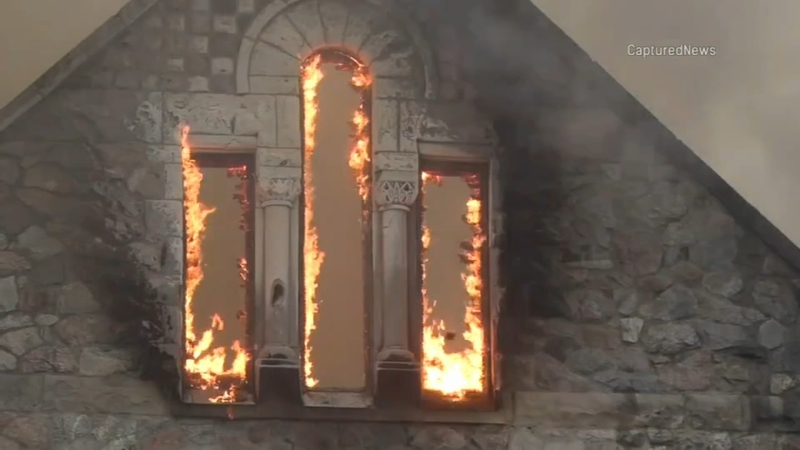 CHICAGO (WLS) -- Fire department crews were back on site at Englewood's Antioch Missionary Baptist Church on Tuesday afternoon as flare ups continued to pop up.

They had been there twice on Tuesday, and nearly every day since a construction-related fire consumed the historic church on Good Friday.

"I don't want to say dawn on me, but I'm beginning to really process, that's a better word, process the magnitude of the loss," said Pastor Gerald Dew.

And yet, despite the ongoing flare ups, one thing remained nearly untouched: an inside mural portraying the resurrection of Christ. It is something Dew chooses to see as a sign of things to come.

"He promised he would return. And so, just as he is risen, and has ascended, we believe we will rise from this," Dew said.

But even as firefighters remained on scene nearly around the clock, structural engineers were there as well. There are important decisions that need to be made before any rebuilding plans can be made.

"If we get the word that these walls that you see standing can be saved that would be an incredible blessing to us," Dew said.

Once the determination is made regarding the salvage-ability of the walls, then the attention will move to rebuilding the church itself, but that, ABC7 is told, will not happen without help from the community. Antioch Missionary Baptist will be launching effort a major fundraising effort later this week.
Report a correction or typo
Related topics:
chicagoenglewoodbuilding firereligionchurch firefire departmentsfirechurchchicago fire departmenteaster
Copyright © 2022 WLS-TV. All Rights Reserved.
CHURCH FIRE
'Raise it up': After Englewood church fire, faithful will rebuild
Demolition work begins at Englewood church destroyed by fire
Englewood church on fire again, CFD says
Congregation celebrates Easter despite devastating church fire
TOP STORIES
Security guard shoots man in buttocks at Millennium Park
Chicago mass shooting victim ID'd as father of 2, with twins on way
Teen boy's death after scam is part of increase in 'sextortion': FBI
At least 1 dead, 44 injured after tornado strikes northern Michigan
9 shot, 2 fatally, on Near North Side
Roz Varon's Weekender Report
Chicago Weather: Occasional showers, thunder Saturday
Show More
BARK returns to the park to support dogs in need
Russia's claim of Mariupol's capture fuels concern for POWs
2 robberies happen 1 day apart at CTA bus stop on South Side: police
US, South Korea open to expanded military drills to deter North
3 wounded in separate shootings on South Side, Chicago police say
More TOP STORIES News